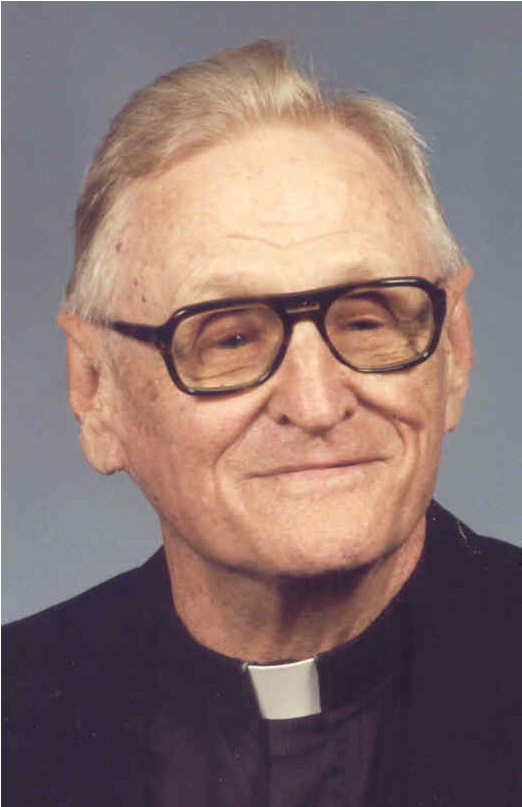 Reverend John F. Beacom, of West Point, went to meet his heavenly Father June 23, 2012 after 99 years on earth. Funeral Mass will be 10:30 am. Tuesday at St. Mary’s Catholic Church in West Point. Burial with Military Honors will be at St. Michael’s Cemetery. Vigil Services will be 7:00 pm. Monday at St. Mary’s Catholic Church. Visitation will be noon until 5:00 pm. at Stokely Funeral Home and then continue at the church. John Beacom was born on a farm near Jackson, NE to Louis Phillip Beacom and Anna Kramper (Albenesius) Beacom, August 15, 1912, the Feast of the Assumption. He attended Brushy Bend grade school before graduating from St. Catherine’s Academy in Jackson, NE. Father Beacom knew at a very young age that he wanted to serve God as he was born on a Holy Day and everyone went to Mass on his Birthday. He entered Conception College for 2 years then St. Louis Prep Seminary for 2 years before entering Kenrick Seminary for 4 years, where he finished his education. Father Beacom was ordained a priest on April 11, 1937 at St. Cecilia’s Cathedral in Omaha by Bishop Ryan and on April 18, 1937 celebrated his first Mass at St. Patrick’s Church in Jackson. He assisted at St. Bridgett’s, Blessed Sacrament, and St. Bernard’s parishes in Omaha. Father Beacom served in the U. S. Army, as a Chaplain, during World War II from February 19, 1942 until February 3, 1946, received his Chaplain training at Harvard University, and was assigned with the Fifth Armor Division in Northern Africa and in Italy. When he entered Rome, Father Beacom met Pope Pius XII and celebrated Mass at “the Altar of the Chair” at St. Peter’s. His favorite Mass to talk about was Midnight Mass in 1944 in a barn with the troops. It made no difference what their religion was, Father Beacom felt honored to be serving God, with the troops for his country. Father was grateful to come back to the quite Nebraska country side and serve as Pastor of St. Andrew’s in Bloomfield for 5 years, St. Aloysius in Aloys for 25 years and at Holy Cross in Beemer for 5 years. Fr. Beacom had a wonderful sense of humor, and a way with words. He celebrated many occasions, some sad, with many special people. He felt blessed to have Marie Gerken as his housekeeper for many years. He loved the Holy Eucharist, and the Rosary. The Blessed Virgin was his favorite Lady, and her Son, Jesus, was his best friend. He was a priest for 75 years, and was the oldest priest in the Omaha Archdiocese. Fr. Beacom is preceded in death by his father Louis Beacom, mother Anna Beacom, brother Reverend Vincent Beacom, half brothers, Joseph and Emmett Albenesius, and their spouses, sisters, Anna Marie Terhaar, and Helen Catherine ( Ella) Kavanaugh, and their spouses. Fr. Beacom is survived by his house keeper, Marie Gerken of West Point, 18 nieces and nephews and many great and great-great nieces and nephews. In lieu of flowers memorials may be made to Central Catholic Endowment.