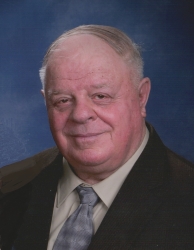 Raymond Pieper, 79, of Dodge, died Friday, June 7, 2019 at Parkview Home in Dodge. Funeral Mass will be 10:00am on Thursday, June 13 at St. Wenceslaus Catholic Church in Dodge with Rev. An Duy Phan as celebrant. Burial will be at St. Wenceslaus Cemetery with lunch following at the church hall. Visitation will be Wednesday from 2:00pm to 7:00pm with a rosary at 3:00pm and vigil service at 7:00pm all at St. Wenceslaus Catholic Church in Dodge. A memorial has been established. Arrangements by Stokely Funeral Home. Raymond Theodore Pieper was born on June 26, 1939 to Conrad and Mary (Baumert) Pieper on the family farm south of Dodge. He attended country school and graduated from Dodge High School in 1958. On November 16, 1963, Ray married Virginia Houghton at St. Joseph’s Catholic Church in Wisner. The couple lived on the home place where they farmed and raised livestock. In 2000, the couple retired and moved to Dodge. Ray was a member of St. Wenceslaus Catholic Church, Holy Name Society, and the Catholic Order of Foresters Court #863 where Ray was Chief Ranger. Tennis was Ray’s favorite sport. He loved to watch matches on television and attended matches in Omaha. The couple loved to travel and made it to almost every state including Hawaii. Trips to Branson were among Ray’s favorite along with the trip to Cuba. Survivors include wife, Virginia, of Dodge; daughters, Lorraine Pieper of Fremont, Doris (Tom) LaForge of Williamston, MI, and Dawn Pieper of Tampa, FL; sons, LaVern (Chris) of Eua Beach, HI, Chad (Lila) of Dodge, and Raymond, Jr. (Susan) of Omaha; grandchildren, Joshua Pieper, Chilsea Tankersley, Katrina Pieper, Megan and Gavin LaForge, Chloe, Landen, and Abbey Pieper, and Julia Wolfe; great-granddaughter, Eliza Tankersley; sisters, Dolores Fees of Bennington, Marlene (Leonard) Kabes of Clarkson, and Irene (Gary) Brosch of Bennington. Ray is preceded in death by his parents; sister, Agnes (Stanley) Gall; brother, Richard; and brother-in-law, Kenneth Fees.