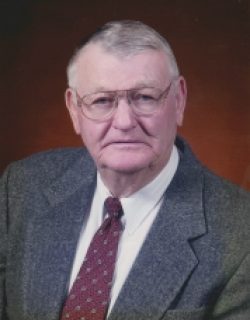 Quintin Dirkschneider, 91, of Dodge, died Monday, September 28, 2015 at Parkview Nursing Home in Dodge. Funeral Service will be Thursday, October 1, 2015 at 11:00am at St. Wenceslaus Catholic Church with Reverend An Duy Phan as celebrant. Burial will be at St. Wenceslaus Cemetery followed by lunch in the church basement. Visitation will be from 2:30pm to 8:00pm with a rosary at 3:00pm and a vigil service at 7:00pm on Wednesday all at church. Memorials may be made to St. Wenceslaus Catholic Church. Quintin was born January 15, 1924 at West Point to Frank and Margaret (Batenhorst) Dirkschneider. He attended country school at West Point and Saint Leo’s Catholic School in Snyder. On September 7, 1948 Quintin married Dolores Kroenke at St. Joseph’s Catholic Church in Dodge. The couple resided on a farm in the Webster area, moving into Dodge in 1984. Quintin spent his life as a farmer and continued to help his son after moving into town. Quintin enjoyed woodworking, tending his big garden, and fishing. He loved spending time with his grandchildren and great-grandchildren. Quintin was a member of Saint Wenceslaus Catholic Church. Survivors include his wife Dolores of Dodge, sons; Jim and Kenny (Janis) Dirkschneider all of Scribner, and Chris (Liz) Dirkschneider of Fremont, daughters; Phyllis Dirkschneider of Snyder and Karen (Joe) Cappellano of Dodge, brothers; Vincent and Francis Dirkschneiderboth of Dodge, and Dale (Stella) of Oklahoma City, OK; sister Bernice Kaup of Dodge, sisters-in-law Julia Dirkschneider and PatriciaDirkschneider both of Snyder, 13 grandchildren and 10 great grandchildren. He is preceded in death by his parents, daughter-in-law Vicki Dirkschneider; brothers and sister-in-law Norbert, adrian (Melva), and Ray Dirkschneider; brother-in-law Richard Kaup; sisters-in-law Alice and Alma Dirkschneider; granddaughter Amy Cappellano, and great granddaughter Haydyn Buss.