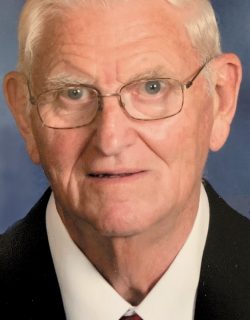 Paul Bracht, 80, of West Point, died October 22 at home, surrounded by his family.  Funeral Mass will be 10:30am on Monday, October 26 at St. Mary’s Catholic Church with Rev. Steve Emanuel as celebrant.  Burial at St. Michael’s Cemetery with lunch following at the Nielsen Center.  Visitation will be on Sunday from 4:00pm to 5:00pm with a Knights of Columbus Rosary at 5:00pm at St. Mary’s Catholic Church.  Masks are strongly encouraged at the funeral and visitation and seating will be socially distanced by household.  The funeral will be live streamed on the Stokely Funeral Home Facebook page at facebook.com/stokelyfuneralhome.  Memorials may be made to the Guardian Angels Endowment or the St. Mary’s Catholic Church Endowment.  Arrangements by Stokely Funeral Home.

Paul Francis Bracht was born February 25, 1940, at St. Francis Memorial Hospital in West Point to Anton and Elizabeth (Hunke) Bracht.  He learned his values of hard work, endurance and resiliency growing up on the farm east of town.  He attended what is now Guardian Angels Central Catholic and graduated in 1958.  After graduation, he joined the Army, and served for four years.  After his honorable discharge, he came back home and completed a course for auto bodywork in Omaha.  He then moved to Sioux City and worked for Charley Miller as a body man.

In late June, 1963, he met Vera Rose Burns at a dance at the Riverside Ballroom in North Sioux City.  Their first date was set for July 4th, they were engaged that Christmas and were married September 12, 1964, at St. Joseph’s Church in Ponca.   They moved back to West Point a year later, and he started his own body work business.

In 1977, he opened Bracht’s Furniture, and with his wife Vera, ran the store for 38 years.  He truly loved his business and meeting new people.  He was an avid supporter of the West Point business community and took pride in serving on the Industrial Board.  He helped bring Valmont to West Point and was focused on bringing opportunities to small town business.  He was a founding charter member of the West Point Optimists and supported the Optimists for 45 years.  Paul also formed a partnership with his sons and some other investors to open Lincoln Street Market.

Paul had an active and devoted faith.  He was a member of St. Mary’s Parish and served as a Eucharistic minister.  For many years, he took communion to the sick and enjoyed visiting with those who could no longer attend Mass in person.  He maintained a holy hour every Tuesday morning at 2:00 a.m. for over 20 years, until his health forced him to give it up.  Paul also had a great devotion to the rosary and the Blessed Mother.  His rosary was always in his pocket, and he said at least one rosary a day.

Paul enjoyed simple pleasures.  In his younger days, he enjoyed square dancing and traveling to new places.  He liked to see how other people lived and what they liked to do.  He always wanted to talk to other people in the furniture business, to see how things were going for them.    He had the opportunity to visit Rome with now-Bishop Joseph Hanefeldt for his 30th wedding anniversary and had great memories from that trip.  He also visited the family home in Kallenhardt, Germany, and enjoyed meeting all the relatives who are still there.  Paul enjoyed playing cards and Mexican dominos.  He also treasured being a grandpa, and could always be counted on to go to games, school performances, and share many bowls of ice cream.  He was deeply loved and will be dearly missed.

He is survived by his wife of 56 years, Vera, and his six children: Tony and Dan (Karen) of West Point, Tim (Mia) of Overland Park, KS; and Teresa, Amy and Andy (and special friend Lisa Woodrow) of Omaha; his grandchildren Joseph, Lauren and Molly Bracht of West Point, Madi Walker of Fremont, and Lura, Cecilia and Paul Bracht of Overland Park, KS; his brother, Ed Bracht; his sisters-in-law Millie Bracht, Judy Bracht, and Marian Bracht; brother-in-law Fred Gentrup; and many nieces and nephews.

He is proceeded in death by his parents; his brothers Leonard, Norbert and Vic; his sister Dorothy Gentrup; his sisters-in-law Helen Bracht and Mary Zeisler; and his brothers-in-law Raymond Burns, Paul Burns and Bob Zeisler.