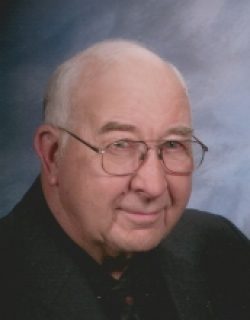 Norman Abrahams, 87, of West Point, died Wednesday May 1, 2019 at Methodist Fremont Health Hospital. Funeral service will be 1:30pm on Saturday, May 4 at St. Paul Lutheran Church with Rev. Richard Bringewatt as officiant. Burial will be at Mount Hope Cemetery with lunch following at the church hall. Visitation will be Friday from 12:00pm to 7:00pm with family receiving friends from 5:00pm to 7:00pm at Stokely Funeral Home. Memorials may be made to St. Paul Lutheran Church for future designation by the family. Arrangements by Stokely Funeral Home. Norman Dale Abrahams was born on October 23, 1931 to Herman and Sophia (Suhr) Abrahams in Utica. The family moved to rural West Point and Norm was confirmed at St. Paul Lutheran Church. At age 13, he quit school to start farming which he continued to do until 2018. On December 26, 1951, Norm married Pearl McReynolds at Grace Lutheran Church. Col. Norm had his first auction in 1985 and he continued that practice for many years. Norm was a member of the Nebraska Auctioneers Association and St. Paul Lutheran Church where he was the chairman of the congregation serving in numerous positions including head usher. He loved playing cards especially pitch. Survivors include his wife, Pearl, of West Point; children, Lawrence (Kathy) of Beemer, Glen (Karen) of West Point, and Jill (Nick) Luebbert of West Point; grandchildren, Karen (Tim) Munderloh, Robert (Kelly) Abrahams, Dustin (Robyn) Abrahams, Brian (Lizz) Abrahams, Sarah (Andy) Smith, Kayse (Jon) Fields, Jason (Rachel) Luebbert, Jeff (Colton) Luebbert, and Jon (Paige) Luebbert; 17+ great grandchildren; sisters, Elsie Phiefer of Harlan, IA and Gladys Ventris of Beemer; and numerous nieces and nephews. He is preceded in death by his parents and daughter, Joy Abrahams.