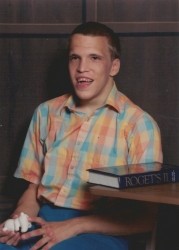 He was the son of Jacque P. (Maybee) and the late Thomas R. Tibbels, MD.

Mikey was born December 28, 1967, in Lincoln, the youngest of six children. Born with severe and profound autism, Mikey was non-verbal but always found a way to communicate. He would arrange the people in the room with him, keeping those close whom he wanted near him and sometimes leading someone out of the room altogether.

His favorite game growing up was ‘no,’ also one of the few words he could say. He would take an object and run with it while his siblings would chase him until he dove on to a bed to be tickled. Then he’d get up and do it all again. His laugh was infectious and genuine, a true belly laugh reminiscent of his dad’s, something his family could never get enough of.

He possessed ‘super powers’. When swimming, he could hold his breath enough to make bystanders worry, then he would happily blow bubbles and splash to his heart’s content. He was also a master pot lid spinner, setting several in motion at once, walking away to attend to another of his games, returning at just the right time to reset the lids to their spinning before they became still. Mom always knew where to find the lids when it was time to make dinner.

When Mikey was agitated and upset, his family knew that playing the soundtrack from the movie ‘The Fiddler on the Roof’ would calm him. In his last few days, Mikey introduced the medical staff and caregivers on the fifth and eighth floors of Clarkson Tower to the music he loved. Because of Mikey, a whole new generation is humming along with Tevye as he sings, ‘If I Were a Rich Man . . .’

The most beautiful thing about Mikey Joe was that he could do no wrong. He was a pure soul. He taught his family what it means to love without expectation. He taught them patience, forgiveness, selflessness, compassion and empathy. He taught us how to play with him, his made-up games. His life has been rich with love, fellowship and friendship.

Mikey was loved by many, including his caregivers and the staff at his home and at day services in Norfolk, with Northstar Services. His Northstar family includes, Elizabeth Milligan, Carol Dickes, Nick Karanja, Sarah Voecks, Christy Gubbels, Barb White, Ginger Hunter and Pat Sullivan.

Memorials may be made in Mikey’s name to Northstar Services, 312 N. 7th Street, Norfolk, NE 68701.  Arrangements by Stokely Funeral Home.