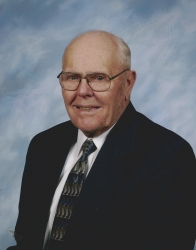 Leroy Radecker, 90, of Norfolk, formerly of West Point, and Pender, died Saturday, August 8, 2015 at Norfolk Veteran’s Home. Funeral service will be 10:30am. Tuesday, August 11, 2015 at St. Paul Lutheran Church in West Point with Reverend Richard Bringewatt officiating. Burial at Mount Hope Cemetery. Visitation noon to 8:00pm. with family present 6:00pm. to 8:00pm. Monday at Stokely Funeral Home. Memorials may be made to St. Paul Lutheran School, Sunshine Center or St. Joseph’s Retirement Community. Leroy Otto Radecker was born November 9, 1924 on the family farm southeast of West Point to Hans and Johannah (Reimers) Radecker. He attended District 15 country school, St. Paul Lutheran School, and was a 1942 graduate of West Point High School. Leroy served in the United States Army during World War II and was stationed in Japan. Leroy farmed with his father and brother Thomas, moving to a farm at Pender in 1952. He retired into West Point where he continued to be a caregiver to his parents. Leroy was a lifelong member of St. Paul Lutheran Church. His favorite pastimes included spending time with family, fishing in Minnesota, and socializing. Survivors include his sister Margaret (Glenn) Siebrandt of Pender; three nephews and four nieces; Leroy was preceded in death by his parents; brothers Thomas and Franklin; and sister-in-law Dorothy.