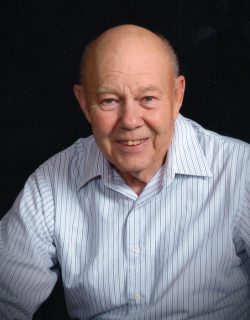 LeRoy “Pete” Arthur Peatrowsky, 76, of West Point, died Monday July 20, 2020 at Dunklau Gardens in Fremont.  Funeral Mass will be 10:30am on Friday, July 24 at St. Mary’s Catholic Church in West Point with Rev. Steve Emanuel as celebrant.  Burial with military honors will be at St. Michael’s Cemetery with lunch following at the GACC Cafeteria.  The funeral service will be live streamed at the Stokely Funeral Home Facebook page at facebook.com/stokelyfuneralhome.  Visitation will be Thursday from 12:00pm to 7:00pm with a vigil service at 7:00pm at Stokely Funeral Home in West Point.  Family will be present at visitation from 5:00pm to 7:00pm.  Seating for the funeral and vigil service will be socially distanced by household.  Memorials may be made to the West Point Volunteer Fire Department.  Arrangements by Stokely Funeral Home.

LeRoy was born on September 27, 1943 on a farm in Cuming County near Beemer, the son of Lawrence and Margaret (Fillmer) Peatrowsky.  His first year of school was at District 28, after which his family moved to Beemer where he completed his schooling, graduating in 1961.  He served in the United States Army Reserves from July 1965 to 1971.  In 1965, LeRoy moved to West Point and married Lois Wackel.  To this union two children, Tracie and Troy, were born. LeRoy worked at Zobel Farm Store and Stalp Gravel until getting a job in 1981 for the City of West Point doing janitor work for several years.  He later did mechanic work on city vehicles and other equipment.

In 1986, he married Judy Stafford Retzlaff.  In 1997, they moved to Henderson, NV where LeRoy worked in maintenance at an apartment complex.  LeRoy retired and moved back to West Point in 2011 after Judy’s death from cancer in 2010.  Since retirement, he has kept busy doing odd jobs for people.

Leroy was a member of St. Mary’s Catholic Church, Knights of Columbus Council #2272, and American Legion Post #70.   He was also a member of the West Point Fire Department for 30 years.  During that time, he served a few years as Fire Chief and several years as Assistant Fire Chief of Company 2.