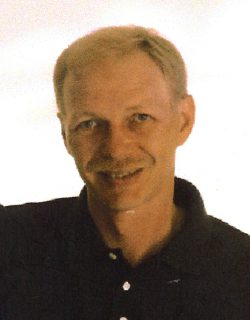 Leon attended St. Leo’s Catholic grade school and in 1980 he graduated from Snyder High School. Leon was an artist and loved to draw. He went to Platte Community College in Columbus, NE for architecture.

After college he worked for Coen Engineers in Fremont, NE and lived in the Fremont area while his kids were growing and going to school. Leon later became an electrician and worked at Fremont Electric, Hooper Electric and Tyco Pentair Tracer for many years before starting his own business, Midwest Thermal Management. He had a kind heart and often gave people jobs when no one else would. He gave many people a second chance in life.

He lived in Hooper, NE before he realized his dream and purchased the acreage South of Snyder where he had space to raise longhorn cattle and his champion bloodline German Short-hair dogs with the help of his son Ethan. The best part of this dream was that his children and especially his grandchildren loved to come out to the farm. They meant the world to him and being able to share that time with them was everything.

He always loved video games and even had a vending machine business, when you had to leave home to play video games.

He is a Lifetime Member of the Texas Longhorn Breeders Association of America and holds a United States Parachute Association First Jump Certificate from Omaha Skydivers, Inc.

Leon was preceded in death by his grandparents;