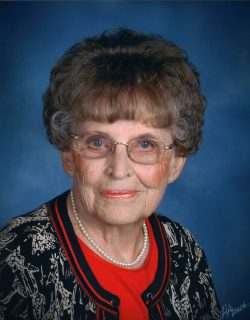 Julia Lorraine Dirkschneider was born on April 24, 1924 to John and Philomina (Vogel) Parr in Dodge. She attended St. Joseph’s Catholic Church and Dodge Public School. On April 4, 1945, Julia married Norbert Dirkschneider at St. Joseph’s Catholic Church in Dodge. The couple farmed 1.5 miles south of Snyder where they raised chickens, hogs, and cattle. Julia believed in a good work ethic and raised her children to the same standard. The couple moved to Snyder in 1965 where Julia worked various jobs including housekeeping for the priests at St. Leo’s Catholic Church for 9 years.

Julia was a member of St. Leo’s Catholic Church where she served as a sacristan and EMHC for many years. She knew her way around the kitchen as the aroma of fresh bread and other baked goods drifted throughout her home. Embroidery was another specialty of hers and every child, grandchild, great grandchild, and great great grandchild received a homemade baby blanket. Julia’s immense faith and love of family were the pillars of her life.