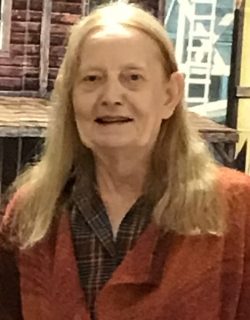 Judith (Siebrandt) Burke, 66, of West Point, died Thursday, October 1, 2020 at Nebraska Medicine in Omaha.  Funeral service will be 10:30am on Monday, October 5 at St. Paul Lutheran Church in West Point with Rev. Robert Schilling as officiant.  Masks will be required at the service and seating will be socially distanced by household.  The funeral will be live streamed on the Stokely Funeral Home Facebook page at facebook.com/stokelyfuneralhome.  Burial will be at Mount Hope Cemetery.  Visitation will be Sunday from 3:00pm to 7:00pm with family receiving friends from 5:00pm to 7:00pm at Stokely Funeral Home.  Memorials may be made to St. Joseph’s Retirement Community.  Arrangements by Stokely Funeral Home.

Judith Lee Burke was born on March 26, 1954 to Leo and Arlene (Stahmer) Siebrandt in West Point. She was baptized and confirmed at St. Paul Lutheran Church. She graduated from West Point Public High School in 1972. In 1973, Judy married Dennis Krutilek. From this union was born her son, Eric. The couple later divorced. She lived in various places across the country engaging mostly in secretarial work. Later, she married Paul Burke and the couple later divorced. Judy returned to West Point and moved to St. Joseph’s Retirement Community in 2014.

Judy looked for the beauty of the world around her. Judy had a fervent love of Native American culture. Judy could be found cross stitching or quilting. Her sass and sense of humor were endearing qualities to all she encountered.

Survivors include son, Eric Krutilek of New Hampshire; grandchildren, Kaylee and Kyle Krutilek; sisters, Diane (Wayne) Grulke and Laurie Porter both of Omaha; brother, Randy (Kayla) Siebrandt of West Point; and several nieces and nephews. Judy is preceded in death by her parents, and brother, Clark.