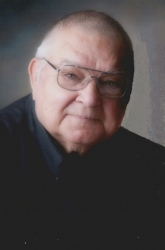 Joseph’Keppy’ Svoboda, 77, of Dodge, formerly of Howells, died Sunday, August 14, 2016 at Brookestone Acres in Columbus. Funeral Mass will be 10:00am on Wednesday, August 17 at St. Wenceslaus Catholic Church in Dodge. Burial with military honors will be at St. Wenceslaus Cemetery with lunch following at the church hall. Visitation will be Tuesday from 3:00pm to 7:00pm with Knights of Columbus rosary at 7:00pm all at church. The family will designate memorials at a later time. Joseph Jerry Svoboda was born on April 20, 1939 to Frank J. and Esther (Nadrchal) Svoboda in rural Colfax County. Joseph grew up in rural Colfax County and attended country school and Howells High School. In 1962, he was drafted into the United States Army where he served in Germany and was honorably discharged in 1964. On October 5, 1968, Joseph married Patricia Ortmeier at St. Wenceslaus Catholic Church. The couple farmed south of Howells, and Joseph was a seed corn dealer. He retired in 2001 and the couple moved to Dodge in 2007. Joseph was a member of St. Wenceslaus Catholic Church, Howells 3rd Degree Knights of Columbus, and Dodge American Legion. He was also on the Husker Coop Board and Clyde-Dublin Cemetery Board. Joseph loved to go hunting and fishing. Survivors include his wife, Pat, of Dodge; daughters, Cindy (Mark) Kratochvil of Clarkson, Lori (John) Jacobs of Raymond, and Diane (Josh) Perrin of Howells; grandchildren, Joseph and Bradley Kratochvil, Austin Jacobs, and Sasha, Caleb, Grant, and Jarrett Perrin; sister, Joanie Smejkal of Bellevue; brothers, Frank of Howells, Robert (Shirley) of Rogers, and David (Lynn) of Schuyler; and brother-in-law, Milo Brichacek of Schuyler. Joseph is preceded in death by his parents; and sisters, Dorothy Brichacek and Betty (Robert) Glodowski.