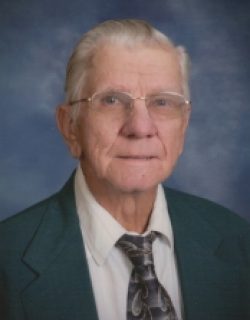 John William Throener was born on February 21, 1936 to John and Sophie (Heiman) Throener in West Point.  He was baptized and confirmed at St. Anthony’s Catholic Church and attended school at St. Anthony’s Catholic School.  John farmed with his family before joining the United States Army in 1956.  He served in the Korean Conflict and was honorably discharged in 1958.  On April 29, 1961, John married Rita Oligmueller at St. Boniface Catholic Church at Monterey.  The couple farmed on the Throener family farm where they also raised cattle and hogs.   John and Rita enjoyed heading to Arizona during the winters.  They moved into town in 2010.

John was a member of St. Anthony’s Catholic Church where he was a trustee and member of the Holy Name Society.  John and Rita enjoyed dancing and were especially fond of the polka.  Their dancing abilities won them a trip to Europe where they visited England, France, and Germany.   JT could be found playing sheephead or at a local coffee shop with friends.  He loved to farm and did so all 83 years of his life.  John especially appreciated spending time with his 15 grandchildren.

Sister, Marilyn (Don) Kloke of Medford, OR; and sister-in-law, Agnes Throener of Omaha.
John is preceded in death by his parents; and brothers, Irvin (Rita), Jerome, and Norbert in infancy.