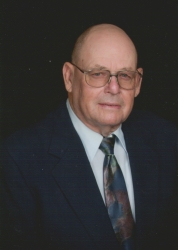 Jim Kindschuh, 81, of West Point, died October 4, 2019 at St. Joseph’s Hillside Villa in West Point.  Memorial Service will be 10:30am on Friday, October 18 at Grace Lutheran Church with Rev. Priscilla Hukki as officiant.  Burial with military honors will be at Mount Hope Cemetery with lunch following at the church hall.  Visitation will be Thursday from 12:00pm to 6:00pm with family receiving friends from 4:00pm to 6:00pm at Stokely Funeral Home in West Point.  Memorials may be made to Grace Lutheran Church.  Arrangements by Stokely Funeral Home.

Jimmie Dean Kindschuh was born on March 10, 1938 to John and Dorothy (Groene) Kindschuh in West Point.  He was raised on the family farm south of West Point and graduated from West Point Public High School in 1955 at the age of 16.  Jim joined the United States Navy in 1956 and served aboard the USS Grand Canyon (AD-28) as a pipefitter.  He made 2 long cruises, 1 to northern Europe and 1 to the Mediterranean.  On July 2, 1957, Jim married his high school sweetheart, Mary Lou Priebnow, at Grace Lutheran Church in West Point.  The couple moved to Fall River, MA where Jim was stationed.  After being honorably discharged in 1959, Jim and Mary Lou returned to West Point.  Jim and his 3 brothers owned and operated Kindschuh Brothers service station where Jim worked for 55 years, retiring in 2014.

Jim was a lifelong member of Grace Lutheran Church.  His hobbies include golfing at the Oakland Golf Course, playing cards at Lion’s Club, and watching baseball.  An avid outdoorsman, Jim enjoyed fishing, hunting, and shooting blue rocks.  He was also known to shoot squirrels, raccoons, and wild turkeys in the backyard with a pellet gun. Some favorite adventures were fishing in Canada and Minnesota and hunting in Western Nebraska.  As a couple, Jim and Mary Lou loved to spend time with friends, attend Husker football games, play bridge, and sail on cruises.  A trip to Alaska was one of their most cherished memories.