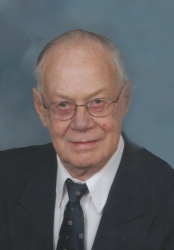 James J. Lueckenhoff, 86, of West Point died Friday, May 22, 2015 at Fremont Area Medical Center. Funeral Mass will be 10:30 am Tuesday, May 26, 2015 at St. Mary’s Catholic Church in West Point with Reverend Frank Lordemann as celebrant. Burial with Military Honors at St. Michael’s Cemetery. Wake Service at 7:00 pm Monday at St. Mary’s Catholic Church. Visitation 9:00 am until 5:00 pm at Stokely Funeral Home and 5:00 pm to 7:00 pm Monday at the Church. Memorials may be made to St. Michael’s Cemetery, St. Francis Memorial Hospital Foundation, or St Mary’s Church. James J. Lueckenhoff was born March 9, 1929 at West Point to Fred and Catherine (Meiergerd) Lueckenhoff. He attended Guardian Angels Catholic School and lived most of his life within half a block of the home where he was born and raised. Jim served in the US Army for two years during the Korean Conflict and was stationed in Alaska. On May 24, 1958, Jim married Joan Kloke at St. Mary’s Catholic Church. The couple lived in West Point, raised their children Mike and Mary Jo. Jim worked as a painter and wood finisher. He took pride in his work having learned the craft from Master Painter Frank Stuholt of Stuholt Painting. Their work was well known in both new and old homes, area churches, St. Mary’s Rectory and Convent. Wood-finishing was his specialty. He was always ready for a visit, peppered with his wit and humor, or to lend anyone a helping hand. Jim was a member of St. Mary’s Catholic Church, Arthur Mack American Legion Post #70 and was a Past Commander. For 32 years he served on the West Point Volunteer Fire Department, Company 2. Survivors include his wife, Joan, of West Point, daughter Mary Jo Lueckenhoff of West Point, sister Agnes’Mutz’ Schlecht of West Point, sister-in-law Rose Lueckenhoff of West Point, brothers-in-law Norman Tomka of Dodge and Franklin Duker of Kenesaw and many nieces and nephews. He is preceded in death by his parents, Fred and Catherine, son Mike in 1978, sisters and brothers- in-law Louise and Maurice Gralheer, Ruth and Fritz Reiman, Joan and Joe Knobbe, Rose Tomka and Karen Duker, brother Fritz Lueckenhoff and brother-in-law Jerome’Bud’ Schlecht. Visit Jim’s living obituary at www.forevermissed.com/james-lueckenhoff