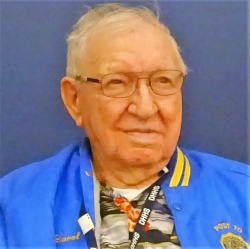 Harold Kahler, 96, of Bellevue, formerly of West Point, died Friday, July 28, 2017 at Nebraska Medical Center in Omaham.emorial service will be 2:30pm on Friday, August 18 at Trinity Church in West Point with Pastor Les Parmenter as officiant. In lieu of flowers, memorials may be made to Trinity Church, Sunshine Center, or American Legion Post 70. Stokely Funeral Home in charge of arrangements. Harold H. Kahler was born on February 11, 1921 in Fairbury, NE to John B. Kahler and Minnie (Meyer) Kahler. He attended country school in Fairbury until the family moved to Stanton County Nebraska in 1929 where he attended school through the 8th grade. He helped on the family farm and as a farm hand until he enlisted in the Army Air Corps in August 1942. He attended basic training at Ft. Leonard Wood, Missouri, then trained as an airplane mechanic for planes used for pilot training. He married Effie V. Marlow in Norfolk, NE on April 16, 1943. Together they spent the war years at bases in California, New Mexico, and the Southwest where Harold was stationed and where Effie worked for Civil Service. He was discharged in February 1946. After his discharge, Harold and Effie returned to the Norfolk-Stanton area where Harold was involved in various jobs until he started farming near Stanton. The family moved to a farm a mile west of West Point in 1951, residing there until June 1965 when they moved to a farm northwest of West Point. Harold retired from farming in 1967 and they moved into West Point where he worked for the City of West Point. He then worked 16 years in the Slaughter Division for Iowa Beef Packers, Inc. in West Point until his retirement in May 1986. Harold was a life-time member of the American Legion Arthur Mack Post 70, where he served in various leadership capacities including Adjunct and Post Commander, and served many years on the Boys’ and Girls’ State selection committee. As a veteran, he was also a member of Forty and Eight. Harold and Effie were members of the Evangelical United Brethren Church in West Point until it merged with the Congregational Church to become Trinity Church. There he served for years with the Trinity Troopers. His survivors include: daughter Cheryl Vossberg and her husband Dennis of Plainview, NE; daughter Bonnie Kahler of Omaha, NE; daughter-in-law Rose Kahler of Garner, NC; grandsons Brett Kahler of California, Roy Kahler of North Carolina, Camron Vossberg of Arizona, and Ryan Vossberg of Utah; and great-grandchildren Wyatt, Wesley, and Abigail Vossberg (parents Camron and Allison Vossberg) and Ryker Vossberg (parents Ryan and Niki Vossberg); sisters-in-law Eva Seda of Norfolk, NE and Mary T. Kahler of Louisville, KY along with a host of nieces and nephews and their families. He is preceded in death by wife Effie, son Darrel,. his parents, brothers Everett, George, and Marvin Kahler, and a sister Marie who died in infancy.