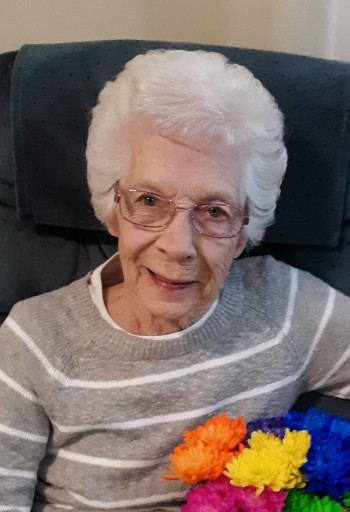 Darlene Wortman, 92, of West Point, died Tuesday, September 21, 2021 at Colonial Haven in Beemer.  Funeral Mass will be 10:30am on Friday, September 24 at St. Mary’s Catholic Church in West Point with Rev. James Weeder as celebrant.  Burial will be at St. Michael’s Cemetery with lunch following at the Nielsen Center.  Visitation will be Thursday from 4:00pm to 7:00pm with a vigil service at 7:00pm at Stokely Funeral Home in West Point.  Family will be present at visitation from 6:00pm to 7:00pm.  Memorials may be made to the family for future designation.  Arrangements by Stokely Funeral Home.

Darlene Marie Bliemeister was born April 23, 1929 in Loretto to William and Josephine (Meier) Bliemeister.  She attended elementary school at Loretto, graduated from West Point High School in 1946, and worked for the Cuming County Superintendent and Rural Electric Association.  On June 6, 1950, Darlene married Norbert Surman at St. Mary’s Catholic Church.  In 1955, the couple moved to California, where Darlene worked as a legal secretary until they returned to West Point in 1974.  She worked as a bookkeeper at Bliemeister Auto Repair until retiring.  After Norbert’s death in 1984, Darlene married Fred “Fritz” Wortman at St. Mary’s Catholic Church on June 28, 1985.

Darlene was a member of St. Mary’s Catholic Church, Guild, and VFW Auxiliary.