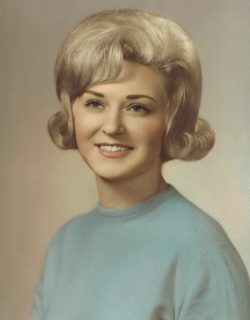 Carlene Joyce (Swanson) Gatzemeyer, 73, of Bancroft, entered into heavenly rest peacefully on
July 26, 2020, at her home surrounded by her devoted husband of 50 years, Alan and her loving children.

Mass of Christian Burial will be held on July 31 at 10:30am at Holy Cross Catholic Church in
Bancroft with Reverend Taylor Leffler as celebrant. Burial will be in the St. Joseph’s Catholic Cemetery near Bancroft. Memorial visitation will be held on Thursday, July 30 from 5:00 until 7:00pm at Holy Cross Catholic Church with a prayer service at 7:00pm. Seating for the funeral and prayer service will be socially distanced by household. Memorials are suggested to the family for future designation. Stokely Funeral Home of West Point is in charge of the arrangements.

Carlene Joyce was born on January 4, 1947 in Oakland, the daughter of Carl and Eva
(Reinert) Swanson. She was baptized and confirmed in the Presbyterian faith. Carlene attended
Lyons Public School graduating in 1965. Following graduation, she attended Bahner’s Beauty
College in Fremont, obtaining a Beauticians Degree. Carlene was a very talented beautician and
many clients commented on her professionalism and passion for styling hair. She also took
great pride in styling her own hair.

Carlene Swanson and Alan Gatzemeyer were united in marriage on October 18, 1969. To this
union, they were blessed with 5 wonderful and loving children. Carlene was a kind, loving, supportive
mother while their children were growing to adulthood, practicing as a beautician and working
alongside her husband farming and raising livestock. She was a God send to all.

Carlene was preceded in death by her parents, Carl and Eva Swanson; brother-in-law, Joe Wiles;
father-in-law and mother-in-law, Gordon and Hope Gatzemeyer; and numerous aunts and uncles.