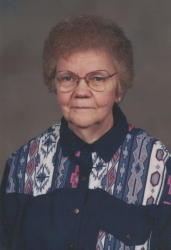 Bernice Steffensmeier, 89, of West Point, died Tuesday, November 24, 2015 at St. Francis Memorial Hospital. Funeral Mass will be 10:30am on Monday, November 30 at St. Mary’s Catholic Church. Burial will be at St. Michael’s Cemetery with lunch following at the Nielsen Center. Guild Rosary will be at 1:30pm and Wake Service will be at 7:00pm Sunday at Stokely Funeral Home. Visitation will be from 12:00pm to 2:00pm then from 5:00pm to 7:00pm Sunday at Stokely Funeral Home. Memorials may be made to St. Mary’s Catholic Church endowment or GACC endowment. Bernice Jane Buse was born March 11, 1926 in West Point to Joseph and Marie (Peterson) Buse. She grew up in Cuming County on the family farm and attended District 28 country school. As a child, she taught herself to play the accordion and could be found playing background music on the radio. On October 11, 1950, Bernice married Herman Steffensmeier at St. Mary’s Catholic Church in West Point. Bernice was proud of being a homemaker and the values of hard work and’get it done’ attitude that she instilled in her children. Bernice also enjoyed finding bargains and gift ideas on QVC. She was a member of St. Mary’s Catholic Church, Guild, and Christian Mothers. Survivors include her sons David (Joan), Larry (Deb), and Mark all of West Point; daughters Carol Steffensmeier of Minneapolis, MN, Susan (Randy) Mejstrik of Omaha, and Sharon (Jay) Langemeier of Wayne; four grandchildren; and 2 great-grandchild. Bernice was preceded in death by her parents; husband Herman on August 22, 1992; son Brian on November 30, 2007; brother Leo Buse; and sister Dorothy Schuetze. Stokely Funeral Home is in charge of arrangements.