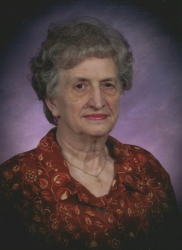 Anna Louise Flores, 89, of West Point, died Wednesday, July 24, 2019 at St. Francis Memorial Hospital in West Point.  Funeral services will be 10:30am on Saturday, July 27 at Grace Lutheran Church in West Point with Rev. Priscilla Hukki as officiant.  Burial will be at Mount Hope Cemetery with lunch following at the church hall.  Visitation will be Friday from 12:00pm to 7:00pm with family receiving friends from 5:00pm to 7:00pm at Stokely Funeral Home in West Point.  A memorial has been established.  Arrangements by Stokely Funeral Home.

Anna Louise Flores was born on December 12, 1929 to William and Emma (Peters) Roemer in Scribner.   She grew up on the family farm near Scribner and graduated from Scribner High School in 1947.  After normal training, Anna taught school at District 63 country school.  On March 4, 1951, Anna married Earl Flores at St. John’s Ridgeley Lutheran Church.  The couple farmed near Hooper and later near West Point before moving to West Point in the 1967.   After working at Campbell’s Soup in Fremont, she worked at Wimmer’s in West Point for many years retiring in the 1990’s.

Anna was a member of Grace Lutheran Church and the American Legion Auxiliary.  Her love of crocheting and knitting was found in the baptismal blankets she made for her children and grandchildren.  Anna enjoyed listening to the Kansas City Royals on the radio and spending time with her family.