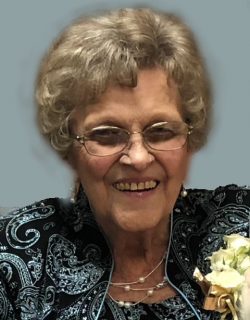 Alice Rolf, 81, of Dodge, died Sunday, August 23, 2020 at Methodist Fremont Health.  Funeral Mass will be 10:30am on Wednesday, August 26 at St. Wenceslaus Catholic Church in Dodge with Rev. Rod Kneifl as celebrant.  The funeral will be live-streamed on the Stokely Funeral Home Facebook page at facebook.com/stokelyfuneralhome. Burial will be at St. Wenceslaus Cemetery with lunch following at the church hall.  Visitation will be Tuesday from 4:00pm to 7:00pm with a vigil service at 7:00pm at St. Wenceslaus Catholic Church.  Masks are strongly encouraged and seating will be physically distanced by household.  Memorials may be made to Dodge Rescue.  Arrangements by Stokely Funeral Home.

Alice Catherine Rolf was born on November 9, 1938 to Fred and Margaret (Bahns) Burenheide on a farm south of Dodge.  The family moved to a farm north of Howells where she attended country school and graduated from Howells High School in 1956.  On April 15, 1958, Alice married Cletus Rolf at St. Henry’s Catholic Church near Howells.  The couple moved to the farm southeast of Dodge where they farmed and raised cattle.  After her children were grown, Alice worked as a cook in Parkview Home in Dodge.  The couple retired to Dodge in 2017.

Alice was a member of St. Wenceslaus Catholic Church and Altar Society.  When she wasn’t cooking food or sewing her children’s clothes, Alice could be found gardening, operating the farm equipment or walking beans.  Alice knew her way around the kitchen.  Homemade cakes were part of the daily routine and two cakes were sometimes necessary to keep the kids happy and well-fed.  As a grandmother, she made the best homemade play-doh and was always happy to spoil the grandchildren and host a sleep over.  Everyone could count on her cookie jar and candy cabinet being full.

Alice is survived by her husband, Cletus;