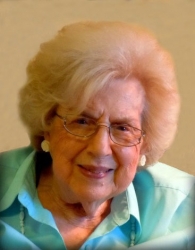 Dolores Wimmer, 95, of West Point, died Saturday, March 16, 2019 at Colonial Haven in Beemer. Memorial services will be 11:00am on Saturday, March 23 at Grace Lutheran Church with Reverend Priscilla Hukki as officiant. Lunch will follow at the church hall. Visitation will be Friday from 12:00pm to 7:00pm with family receiving friends from 4:00pm to 6:00pm at Stokely Funeral Home in West Point. In lieu of flowers, memorials may be made to Grace Lutheran Church or Lutheran Family Services. Arrangements by Stokely Funeral Home. Dolores Mae Marquardt was born to Meta Sievers and John Marquardt on a farm near Scribner NE on April 13, 1923. As a young girl, she gathered eggs and brought in wood and cobs for the stove. She later helped her father deliver milk in town from their milk wagon. On her 18th birthday Dolores met Harold Wimmer at a dance in Snyder and they began their four-year war-time courtship. With her high school’Normal Training’ she taught at a country school, grades 1-8, riding horseback to work each day. After two years of college Dolores taught English and music in Sidney NE. During this time Harold, at her suggestion, had entered the Naval officer’s training program that included two years of college. Dolores followed him to Lincoln, then out to Colorado for a summer and later to Chicago. After Harold’s military service and their marriage in 1945, they settled in Snyder where they lived when Stephen and David were born. In 1950 they bought a run-down house on the edge of Dodge and began a 10-year renovation project during which time Ruth, Mary and Paul were born. The family moved to a home on Main Street in West Point when Paul was a baby. While growing and managing the family meat business took much of Harold’s time and attention, Dolores had major responsibility for managing the growing family–feeding, clothing, and civilizing the five kids. While the kids were becoming more independent, Dolores became more active in the community. Always involved at her church, Dolores taught Sunday school, sang in the choir, and was the choir director for ten years. She was instrumental in getting the first low-income housing established in West Point, worked with Cuming County Drug Awareness, and initiated a Sex Education curriculum in the Grace Lutheran Sunday School. Always a strong supporter of education, she lent her support to the construction of a new building for the high school. In 1977 she returned to school at Wayne State, receiving a Bachelors degree in Art and Education in 1981. As children moved away, and as time allowed, Dolores and Harold enjoyed traveling together making trips to Germany, Norway, Australia and New Zealand, Greece and wherever their kids might be living at the time. For years they wintered in Arizona, staying as long as Harold could keep Dolores away from home. There Dolores continued some of her favorite pastimes. She swam, read, painted, sang in a performing group and she and Harold were regulars on the largest dance floor in Arizona. Survivors include sons, David (Connie) Wimmer of West Point and Paul (Kim) Wimmer of Gretna; daughter, Ruth Wimmer Ferguson (Allan Ferguson) of Denver, CO; grandchildren, Rebecca Wimmer , Aaron (Lisa) Wimmer, Alison Wimmer Schmeider (Jens Schmeider) , Holly Wimmer-Hunke (Jeremy Hunke), Katharine Ferguson, Stephanie Mitchell, Tina Gos (Laurent) and Constantine Mitchell, Alex (Anna) wimmer, Jasmine Semar (Rudy) and Houston Wimmer, great grandchildren Hayden and Mia Hunke, Hannah and Elise Schmeider, Stephen Ochoa Wimmer, Addison and Anora Wimmer and Rudy Lee Semar; brother, John K. Marquardt of Pine Bluffs, WY; sister, Marion Nelson of Lakewood, CA; daughter-in-law, Ela Wimmer of Pecos, NM; former daughter-in-law, Joyce Wimmer of West Point; and son-in-law, Paul Mitchell of Denver, CO. Dolores is preceded in death by her parents, husband, Harold; sister, Margie Moore; son, Steve; and daughter, Mary.