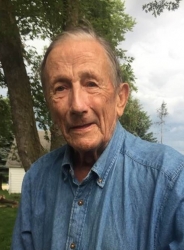 Fred Wieneke 88, of West Point, died Thursday, March 7, 2019 at St. Joseph’s Hillside Villa in West Point. Memorial Mass with military honors will be 10:30am on Tuesday, March 12 at St. Mary’s Catholic Church with Fr. Steve Emanuel as celebrant. Lunch will follow at St. Joseph’s Hillside Villa community room. Burial will be at a later date. Visitation will be Monday from 12:00pm to 7:00pm with a vigil service at 7:00pm at Stokely Funeral Home. Memorials may be made to the Sunshine Center. Arrangements by Stokely Funeral Home. Frederick Joseph Wieneke was born on March 25, 1930 to Steve and Gertrude (Goeken) Wieneke on the family farm south east of West Point. After attending Guardian Angels Catholic School, Fred was drafted into the United States Marine Corps in 1952. He was stationed Korea for a year during the Korean War before being honorably discharged in 1954. Fred went to janitor school and worked at West Point Public Schools as a janitor for 35 years. After his retirement, he worked part time at McDonald’s for a few years. Fred was a member of St. Mary’s Catholic Church. Because of his love of nature, Fred built birdhouses and grew a wonderful flower and vegetable garden. Fred is preceded in death by his parents; sister, Helen Wieneke and infant sister, Adella.