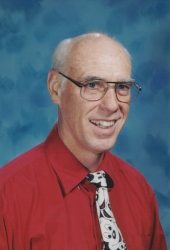 Daryl Boots, 74, of West Point, passed away quietly at home on Wednesday, February 6, 2019. Funeral services will be 1:00pm on Saturday, February 9 at Grace Lutheran Church in West Point with Reverend Priscilla Hukki as officiant. Lunch will follow in the fellowship hall. Burial will be at a later date. Visitation will be Friday from 12:00pm to 7:00pm with family receiving friends from 4:00pm to 7:00pm at Stokely Funeral Home. Memorials may be made to Grace Lutheran Church or the Cuming Choraliers. Arrangements by Stokely Funeral Home. Daryl Paul Boots was born in Redfield, S. D. May 3, 1944 to Paul & Louise Boots. Daryl graduated from Redfield High school in 1962 where he was involved in music and sports, mainly wrestling and track. He graduated from Nettleton Commercial College in Sioux Falls SD in 1963 and worked as General Bookkeeper for Robertson Auto in Brookings, S. D. A year later on September 5, 1964, he married his childhood sweetheart, Sandy Ferguson, and promptly enrolled at Northern State University in Aberdeen, S. D. a few days after getting married. He graduated from Northern State University with a teaching and coaching degree in 1968 and was on the varsity wrestling team all 4 years. After college graduation he taught business and coached wrestling and track for 6 years at Stanley County HS in Ft. Pierre, S. D. He was awarded the Outstanding Young Educator award for 1970-1971 in Stanley, Hughes and Sully counties. In August of 1974, he moved the family to West Point, NE where he taught business and coached wrestling and helped with various other sports until his retirement in 2006. After retiring from teaching he helped coach golf at the Guardian Angels-Central Catholic High School in West Point for 11 years. Growing up, Daryl was an active hunter and fisherman and loved the outdoors. The sport of wrestling was his lifelong passion, but he also enjoyed camping and enjoying outdoor activities with family and friends such as boating, water skiing, canoeing, bicycling, motorcycling, snow skiing, ATVing and golfing. He also loved music and sang with the Cuming Choraliers for over 30 years. Daryl will be inducted into the Nebraska Scholastic Wrestling Coaches Association Hall of Fame on June 7th for his 60 years of participation, coaching, and support of wrestling. Daryl was an active member of Grace Lutheran Church serving as Luther League Sponsor, served on the council, helped with the Marksman program, sang in choir and read lessons at church services. He had been a member of West Point JayCees. Daryl was diagnosed with appendix cancer in 2015 and was given 3 months to live by doctors at 2 different hospitals. Thanks to Sandy’s research, diligence, and persistence along with ardent prayers from family and friends, 3 /12; years were added to his life. We praise and thank the Lord for every day. He is survived by wife, Sandy of 54 Years; daughter, Lana (Dan) Hagedorn of West Point; son, Kevin Boots of Sioux Falls, SD; grandchildren, Joshua, Stephanie, Melissa and Luke Hagedorn and Sydney Boots; sisters, Francelle (Bob) Fuss of Redfield, SD and Lavonne Riechers of Volga, SD; brother, Wayne (Mary) Boots of Custer, SD; sisters-in-law, Arline (Darrel) Walberg of Rochester, MN and Mary Ann Smith of Kent, WA; and many beloved nieces, nephews, cousins, and friends. He was preceded in death by his parents Paul and Louise (Ehrich); and brothers-in-law, Bill Riechers and Larry (Marcia) Ferguson.