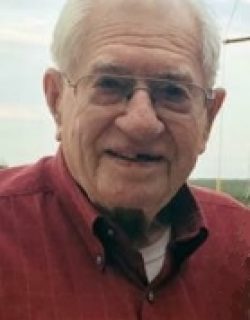 Walter’Wally’ Nebuda, 94, of West Point, died Tuesday, December 4, 2018 at Parkview Home in Dodge. Funeral Mass will be 10:30am on Monday, December 10, 2018 at St. Mary’s Catholic Church in West Point with Fr. Steve Emanuel as celebrant. Burial will be at St. Michael’s Cemetery with lunch following at the Nielsen Center. Visitation will be Sunday from 3:00pm to 7:00pm with a Knights of Columbus rosary at 7:00pm all at St. Mary’s Catholic Church. Memorials may be made to West Point Rural Fire. Arrangements by Stokely Funeral Home. Walter John Nebuda was born on May 22, 1924 to John and Tena (Peatrowsky) Nebuda on the farm northeast of West Point. After graduating from Guardian Angels High School in 1942, Wally traveled by train to join the service for WWII but was sent home prior to basic training. Wally always talked about playing baseball in the pasture with the neighbors on Sundays. They eventually got sponsored by Seeman Truck Line and played in many tournaments in the area. On March 31, 1948, Wally married Dorothy Knobbe at St. Boniface Catholic Church at Monterey. The couple farmed on the Nebuda family farm where they also raised dairy cows and stock cattle. The couple moved to West Point in 2006 and Wally continued to help on the farm well into his 80’s. Throughout their 70 years of marriage, Wally and Dorothy could be found dancing, playing cards, and listening to polka music. Wally was a member of St. Mary’s Catholic Church and 4th Degree Knights of Columbus. As a dairy farmer since 1948, he was a member of American Milk Producers Inc. He was a member of the West Point Rural Fire Board from 1972 to 2006 where he served time as president. Wally loved to bowl especially in the K of C league that he was in from 1942 to the mid 1990’s. Survivors include sons Gerald (Connie) and Jim both of West Point, and Keith of Rolling Meadows, IL; daughters Mary Beth (Tim) Olson of Lincoln and Gina (Ed) Kalous of Norfolk; daughter-in-law Kathy Nebuda of Scribner; 13 grandchildren; 17 great-grandchildren; and first cousins, Tom Hagedorn of Camp Verde, AZ and Jean Humlicek Meier of Beemer. Wally is preceded in death by his parents; wife, Dorothy; son, Richard’Dick’; and great-grandson, Jace Nebuda.