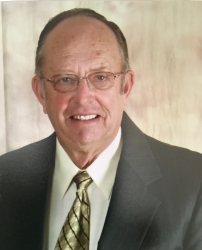 Richard’Dick’ Graybeal, 82, of West Point, died Wednesday, October 3, 2018 at his home surrounded by his loving family in West Point. Funeral Mass will be 10:30 am. on Saturday, October 6 at St. Mary’s Catholic Church with Rev. Steve Emanuel as celebrant. Burial will be at St. Michael’s Cemetery with lunch following at the GACC Cafeteria. Visitation will be Friday from 12:00 pm. to 4:00 pm. at Stokely Funeral Home and will continue from 5:00 pm. to 7:00 pm. at St. Mary’s Catholic Church with Knights of Columbus rosary at 7:00 pm. at St Mary’s church. A memorial has been established at GACC Endowment and St Mary’s Catholic Church. Arrangements by Stokely Funeral Home. Richard Dean Graybeal was born on May 8, 1936 in Merna, NE, in the back of the family grocery store. He graduated from Merna High School in 1954. Dick started his career at a young age in his family store, Davolt Grocery. He moved to St. Paul, NE and worked as a meat cutter. On August 6, 1956, he married his sweetheart, Leona Mae Spanel. The couple moved to Grand Island where Dick was the meat manager at Skaggs. He earned a promotion that moved the couple to Lincoln. The family moved to West Point where he worked as the meat manager for Hasebrooks IGA from 1963 – 1967. The couple owned and operated Dick’s Coffee Shop in 1965. In 1969, they purchased Graybeal’s Grocery. In 1974, they purchased the Hy-top/National grocery store and moved to their present location. In 1978, they remodeled and expanded the grocery store. In 1974, they opened D & L Craft and Gift Shop which they operated until 1985. In 1984, they opened West 32 Riverside Diner which they operated for 13 years. Dick was active in the community he loved. He was a member of the West Point Chamber of Commerce serving as Vice President and President and served on the West Point City Council. He was a member of Jaycees and charter member of the West Point Optimist Club. Dick was a member of St. Mary’s Catholic Church and Knights of Columbus 4th Degree. He was on the Board of Directors at F&M Bank and the West Point Community Theater. His memberships also included the IKES, Eagle’s, Winnebago Club, and Valle Del Oro traveling Billiard Club. Dick enjoyed many hobbies including shooting pool, golf, camping, traveling, playing cards, bowling, dancing, music, playing steel guitar, barbecuing, boating, stained glass art, winters in Arizona, and attending the great grandkids’ events. His favorite times were shared with family and friends and with the love of his life – his wife. Dick and Leona have been married for 62 years and have four children, 12 grandchildren, and 19 great-grandchildren. Survivors include his wife, Leona, of West Point; daughter- Roberta (Dennis) Steinhauser of Davey and children: Lucas (Ashley) – Jay and Ali; Nicki (Curtis) Neesen – Kirby, Keith, Robbie, and Tiffany; and Terra (Matt) Thuman Daughter- Karen (Randy) Baumert of West Point and children: Corey (Kara) – Brynn, Kennedy, Emerson, Leighton; Kristin (James) Wilsey- Jaden and Kaylee; Karla (Derek) Frese- Rosalyn, Ruby, and Kade; and Kelly (Adam) Doescher- Bella, Ryder, and Brody Daughter- Janet (Gregg) Rueschhoff of Elkhorn and children:Jason (Jiear) – Jemma; Lisa (Rod Trice) Son- Mike (Donna) Graybeal of West Point and children: Elizabeth (Aaron) Hofeling; Heath (Michaela) Graybeal; and Dalton Graybeal Mother, Helen Graybeal of West Point; brother, Bob (Jonni) Graybeal; and sister, Dee (Tom) Bernhoft; Dick is preceded in death by his grandparents, LG and Vera Davolt; father, Earl Graybeal; brothers, Larry and Doug Graybeal; brother-in-law, Ivan Coleman; and parents-in-law, Rudolph and Agnes Spanel.