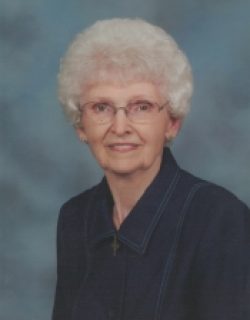 Helen Gentrup, 96, of West Point, died Saturday, August 25, 2018 at Nye Pointe Health and Rehabilitation in Fremont. Funeral Mass will be Friday, August 31 at 10:30am at St. Mary’s Catholic Church in West Point with Fr. Steve Emanuel as celebrant. Burial will be at St. Michael’s Cemetery. Visitation will be Thursday from 12:00pm to 7:00pm with a Christian Mothers rosary at 1:30pm and a Vigil Service at 7:00pm all at Stokely Funeral Home. Memorials may be made to St. Mary’s Catholic Church in West Point, St. Patrick’s Catholic Church in Fremont, or GACC Endowments. Stokely Funeral Home is in charge of arrangements. Helen Theresa Gentrup was born on July 9, 1922 to Henry and Philomena (Doerneman) Dinslage near Aloys. She was raised on a farm near Aloys and attended St. Aloysius School through the 8th grade. On April 7, 1942, Helen married Hilary Gentrup at St. Aloysius Catholic Church. The couple farmed west of West Point until 1990 when Helen moved to town. Helen moved to St. Joseph’s Retirement Community before moving to Shalimar Gardens in Fremont. Helen was a member of St. Mary’s Catholic Church, Guild, and Christian Mothers. She enjoyed playing cards and belonged to a neighborhood extension club for many years. Helen was a 60 year cancer survivor but continued to do the things she loved including sewing, crocheting, and knitting. While on the farm, she gardened and canned and was a wonderful cook and baker. One of her specialties was making Special K bars for every family get-together for as long as she was able. Helen called bingo at St. Joseph’s Retirement Community and cleaned the linens for St. Mary’s for many years. She loved spending time with her family and playing games. Helen is survived by her children, Eileen (Loren) Holzerland of Fremont, Myron (Karen) Gentrup of San Jose, CA, and Renee (Allan) Olson of West Point; 11 grandchildren, 18 great-grandchildren, 4 great-great-grandchildren; and sister-in-law, Theresa Dinslage of Dodge. She is preceded in death by her parents; husband, Hilary, in 1990; and siblings, Ted (Maime) Dinslage, Joe (Agnella) Dinslage, Leonard Dinslage, Betty (Frank) Hunke, Catherine (Joe) Lummel, and Johanna (Walter) Neesen.