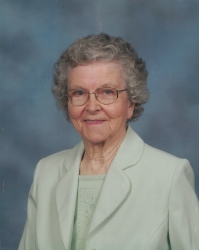 Julia Guenther, 95, of West Point, died Thursday, August 2, 2018 at Colonial Haven in Beemer. Funeral Mass will be Monday, August 6 at 10:30am at St. Mary’s Catholic Church in West Point with Reverend Steve Emanuel as celebrant. Burial will be at St. Michael’s Cemetery with lunch following at the Nielsen Center. Visitation will be Sunday from 12:00pm to 6:00pm with a Christian Mothers rosary at 1:30pm and a Vigil Service at 6:00pm all at Stokely Funeral Home in West Point. Memorials may be made to St. Mary’s Catholic Church, St. Joseph’s Retirement Community, or Colonial Haven. Julia Rose Guenther was born on May 26, 1923 to Frank H. and Amelia (Armbruster) Steffensmeier on the family farm near Olean. After attending Sacred Heart Academy at Olean, she worked as a hired girl for a few families. On June 20, 1945, Julia married Bernard’Ben’ Guenther at Sacred Heart Catholic Church at Olean. The couple farmed west of West Point before retiring and moving to West Point in 1994. Julia moved to St. Joseph’s Retirement Community in 2007 and to Colonial Haven in January of 2018. Julia was a member of St. Mary’s Catholic Church, Guild and Christian Mothers. She alwayshad a large garden and did a lot of canning. Likewise, she raised hens, chickens and ducks. She was a wonderful baker. In retirement, Julia enjoyed patchwork quilting and was active at the Sunshine Center. Julia was known to be a savvy card player and enjoyed all types of games with family and friends. She continued to do the things she loved and persevered humbly even as her eyesight and hearing diminished greatly through the years. Julia is survived by her daughters, Bernice (Frank) Evert of West Point and Doreen Guenther of Boise, ID; sons, Marvin and Norman (Reina) both of West Point; several grandchildren and great-grandchildren, and one great-great-grandchild. Julia is preceded in death by her parents; husband, Ben, in 2001; an infant daughter; a daughter-in-law, Janis Guenther; sister, Mary Steffensmeier; brothers, Conrad, Joseph (Clara), John (Elenora), Carl, Frank, Henry, Albert and an infant brother, Stephen.