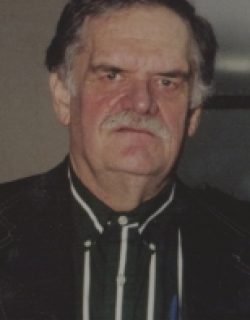 Ivan Heimann, 78, of Snyder, died January 27, 2018 at his home in Snyder. Funeral Mass will be 10:30am on Friday, February 2 at St. Leo’s Catholic Church in Snyder with Reverend Keith Rezac as celebrant. Lunch will follow at the Snyder City Auditorium. Visitation will be Thursday from 4:30pm to 7:00pm with a Vigil Service at 7:00pm all at church. Burial with military honors will be Saturday, February 3 at 1:00pm St. Leo’s Cemetery in Snyder. Memorials may be made to the Snyder Fire Department or Snyder Rescue. Stokely Funeral Home is in charge of arrangements. Ivan Joseph Heimann was born on January 12, 1940 to Anton and Bertha (Langhorst) Heimann in Snyder. Ivan graduated from Snyder High School and enlisted in the Army. After serving from 1961-1962, he worked for Biba Construction in Geneva. Ivan went on to drive truck for Crete Carrier with his faithful companion, Montgomery, Ivan’s bulldog, until his retirement. On January 13, 1979, Ivan married Bonnie Armstrong in Snyder. Ivan was a member of St. Leo’s Catholic Church, Snyder Fire Department, and F. O. E. Club #3623 in West Point. He loved to ride his motorcycle and was a lifelong member of American Bikers Aiming Toward Education (ABATE) of Nebraska. Ivan could be found enjoying a cold beverage and listening to polka music. Survivors include his stepson, Jay (Donna) Armstong of Dodge, and sister-in-law Janet Heimann of Lee’s Summit, MO. He is preceded in death by his parents; wife, Bonnie in 1984; siblings, Ambrose Heimann, Jeanette (Ray) Zucker, and Antoinette Lopez; and his beloved bulldog, Montgomery.