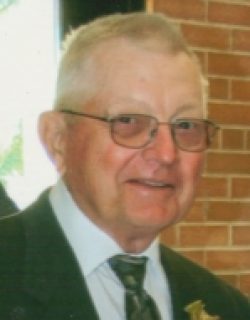 Roman Ortmeier, 86, of Dodge died Friday, December 23, 2017 at Nye Pointe Health and Rehab Center in Fremont. Memorial Mass will be 10:00 am on Wednesday, December 27 at St. Wenceslaus Catholic Church in Dodge with Reverend An Duy Phan as celebrant. Lunch will follow at the church hall and burial will be at a later date. Visitation will be Tuesday from 4:00 pm to 7:00 pm at St. Wenceslaus Catholic Church with a vigil service at 7:00 pm. A memorial has been established. Stokely Funeral Home is in charge of arrangements. Roman Joseph Ortmeier was born on June 15, 1931 to Anton and Catherine (Kreikemeier) Ortmeier on the family farm south of Dodge. He enlisted in the National Guard and was later drafted into the United States Army where he served and was later honorably discharged after serving as a Machine Gun Sergeant for the 31st Field Artillery Battalion while stationed in Korea. He married Alvina (Bayer) Ortmeier on January 3, 1952 at St. Wenceslaus Catholic Church in Dodge. The couple farmed south of Dodge before retiring in 1989 and moving into town. Roman was a member of St. Wenceslaus Catholic Church and a lifetime member of the VFW. He served on the Dodge Public School Board for 16 years, serving several of those years as president. Survivors include his wife, Alvina, of Dodge; daughter, Kathy (Russell) Benne of San Angelo, TX; sons, Richard (Barbara) of Blair and Patrick (Karen) of Dodge; sister, Patricia Svoboda of Dodge; brother, Gilbert (Lorraine) of Dodge; sister-in-laws, Lorraine (Raymond) and Luann (Vincent) Ortmeier of Dodge; grandchildren, Marsha Benne, Scott Benne, Julie (Mark) Edmonds, Michelle (Steve) Martinez, Vicki Ortmeier, Kelly (Zach) Meyer, Brian (Autumn) Ortmeier, Adam (Chelsea), and Kurt Ortmeier; and 9 great grandchildren. He was preceded in death by his parents, sister, Mildred and her husband, Leonard Uher; brothers, Raymond and Vincent Ortmeier, brother-in-law, Joseph Svoboda; granddaughter, Tracy Ortmeier; and parents-in-law, Christian and Leona Bayer.