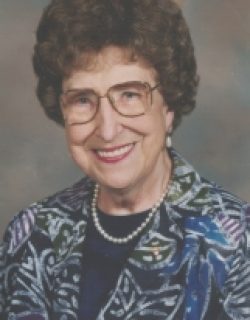 Bernadine Kluthe, 98, of Dodge, died Saturday, October 28, 2017 at Parkview Home in Dodge. Funeral Mass will be 10:30am on Tuesday, October 31 at St. Wenceslaus Catholic Church in Dodge with Fr. An Duy Phan as celebrant. Burial will be at St. Wenceslaus Cemetery with lunch following at the church hall. Visitation will be Tuesday from 9:00am to 10:30am with a rosary at 10:00am at church. In lieu of flowers, a memorial has been established. Bernadine Elizabeth Kluthe was born October 8, 1919 in Dodge to Joseph C. and Mary (Vogel) Kluthe. She attended Sacred Heart School in Olean, graduated from St. Joseph’s Academy in Milwaukee, WI, received her Bachelor’s degree in education from Alverno College in Milwaukee, and her Master’s degree in education and administration from the University of Nebraska in Omaha. Bernadine taught in schools in Wisconsin, Iowa, Minnesota, Illinois, and Nebraska and was grateful for her many years of dedicated service in religious life. Bernadine’s last 11 years of teaching were at St. Wenceslaus School in Dodge. Bernadine was an active member of St. Wenceslaus Catholic Church, Altar Society, Christian Mothers, and Choir. After retiring in 1989 from 51 consecutive years of teaching and administration, she enjoyed her volunteer ministry at Parkview Nursing Home and supported the Dodge Getaway Center since its opening in 1991. Bernadine served in various positions in Omaha Archdiocesan Council of Catholic Women and the rural Northeast Deanery. She was a charter member of the’200 Voice Choir’ in Omaha when the various churches initiated the annual singing of Handel’s Messiah accompanied by the Omaha Symphony. In 2011, Bernadine moved to St. Joseph’s Retirement Community in West Point. She moved to Parkview Home in 2014. Survivors include nieces and nephews. Bernadine was preceded in death by her parents; sisters Bertilla Steffensmeier, Philomena Steffensmeier, Hildegarde Aschoff, Theresa Beran Diesterhaupt, Camella Ulrich, Mathilda Kluthe, Germaine Kassmeier, and Anna Kluthe; brothers, Alfons and Edmund Kluthe.