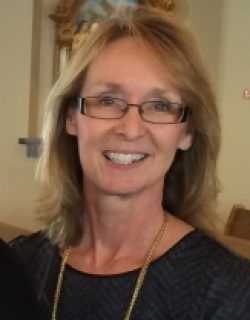 Sandy Knobbe, 57, of West Point, died Tuesday, october 3, 2017 at her home. Memorial service will be 10:30am Friday, October 6 at St. Mary’s Catholic Church with Reverend Steve Emanuel as celebrant. Burial will be a later date as Sandy donated her body to the Anatomical Board of Nebraska. Lunch will be at the Nielsen Center following the service. Visitation will be Thursday from 12:00pm to 4:00pm with a Guild rosary at 1:30pm at Stokely Funeral Home and continue from 5:00pm to 7:00pm at St. Mary’s Catholic Church with a vigil service at 7:00pm. Family will be present at church at 6:00pm. In lieu of flowers, memorials may be made to GACC Endowments or St. Mary’s Catholic Church. Sandra Kay Knobbe was born on July 10, 1960 to Dennis and Lillian (Pottebaum) Reichlinger in West Point. She grew up in West Point and graduated from Central Catholic High School in 1978, she then attended Creighton University and received her degree as a Radiologic Technologist (ARRT) from the University of Nebraska Medical Center. On November 14, 1981, Sandy married David Knobbe at St. Mary’s Catholic Church. She was employed at local hospitals including St. Francis Memorial Hospital and most recently Providence Medical Center in Wayne for 13 years. Sandy continued her education and achieved her certifications in Mammography (M), Diagnostic Medical Sonography (ARDMS) and Vascular Technology (RVT). She continued to work during her 2/12; year battle with cancer until she was no longer able. Sandy was a member of St. Mary’s Catholic Church and Guild. She enjoyed simple things including a round of golf, a Seinfeld episode with a glass of wine and time spent with friends. Sandy always enjoyed watching her sons compete in sports and never missed a game. She had a very distinct personality that included direct and honest responses without being disrespectful. Sandy had a very big heart, and always put others before herself. She loved being a mom and grandma, and enjoyed the blessings of watching her family grow. Survivors include her husband, Dave, of West Point; sons, Henry (Betsy) and Ben (Ashley) both of Omaha; grandchildren, Elyse and Cameron Knobbe; parents, Dennis and Lillian Reichlinger of West Point; parents-in-law, Jerry and Theresa Knobbe of West Point; sister, Jean Chase of Omaha; and brother, Tom Reichlinger of West Point.