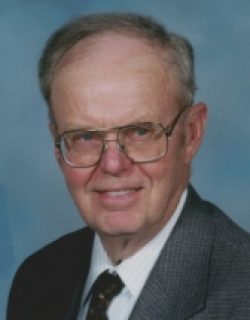 Jerry Reimers, 85, of Scribner, died Tuesday, May 2, 2017 at Nebraska Medical Center in Omaha. Funeral Mass with military honors will be Monday, May 8 at 10:30am at St. Lawrence Catholic Church with Reverend Steve Emanuel as celebrant. Lunch will be in the church hall with burial at a later date. Visitation will be Sunday from 3:00pm to 7:00pm with a Vigil Service at 7:00pm all at church. Memorials may be made to the Scribner Rescue or St. Lawrence Catholic Church CCD program. Stokely Funeral Home in charge of arrangements. Jerald F. Reimers was born on August 31, 1931 to Perry and Mildred (Hartman) Reimers on the family farm in Cuming County and baptized into the Lutheran faith. He attended West Point Public Schools, graduating with the class of 1948. In his youth, Jerry was active in and recognized for his outstanding performance raising 4-H beef cattle. From January of 1953 through December of 1954, he served as a cook in the US Army with stations at Ft. Riley, KS and overseas in Korea. On September 22, 1953, Jerry married Cecilia Parr at St. Joseph’s Catholic Church in Dodge. The couple farmed east of West Point and Webster before moving to Scribner in 1971. Jerry was a member of St. Lawrence Catholic Church in Scribner. He converted to Catholicism after marriage and was devout in his faith. Praying the rosary and watching daily Mass were an important part of everyday life. In his pastimes, Jerry enjoyed building furniture, feeding and watching birds. Jerry is survived by his wife, Cecilia, of Scribner; daughters, Janet (Mark) Essman of Santa Rosa, CA, and Linda Reimers of Idaho Falls, ID; son, Dan (Sherry) of West Point; grandchildren, Andrea (Josh) Francis, Alexis (Justin) Pedersen, Josh Reimers, and Jason Reimers; great-grandchildren, Trevor Francis, Samantha Francis, and Autumn Pedersen; brother, Tom Reimers of Ithica, NY; and cousin, Charles’Chuck’ (Sharon) Sass. Jerry is preceded in death by his parents and granddaughter, Ashley Reimers.