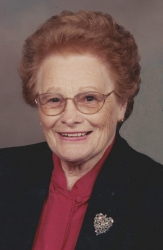 Lucille Rolf, 89, of West Point, died Sunday, April 16, 2017 at Colonial Haven in Beemer. Funeral Mass will be Wednesday, April 19 at 10:30am at St. Mary’s Catholic Church. Burial will be at St. Michael’s Cemetery with lunch following at the Nielsen Center. Visitation will be Tuesday from 12:00pm to 4:00pm with a Guild Rosary at 1:30pm at Stokely Funeral Home and continue from 5:00pm to 7:00pm with a Vigil Service at 7:00pm at St. Mary’s Catholic Church. Memorials may be made to St. Joseph’s Retirement Community or St. Mary’s Catholic Church. Lucille Elizabeth Rolf was born on August 7, 1927 to John and Clara (Bleyhl) Eggerling in Creighton. She grew up on the farm near Snyder where she attended school. On August 10, 1948, Lucille married Wendelin Rolf at St. Peter’s Catholic Church in Stanton. The couple farmed and raised their family on Wendelin’s family farm near Monterey before moving to West Point in 1989. Lucille moved to Colonial Haven in 2013. Lucille was a member of St. Mary’s Catholic Church and Guild. She enjoyed playing cards and was known for her exquisitely manicured lawn. Lucille was active in the community through her various volunteer work with the Red Cross and as a hairdresser at the West Point Living Center. Survivors include daughter, Mary (Chris) Fixley, Omaha; sons, Art (Arlene), Michael (Pam), and Brian (Jeannette) all of West Point, Robert (Marlene) of Dodge, Paul of Fremont, David of Pilger, Richard (Stephanie) of Elkhorn, and Ken (Lois) of Elkhorn; 22 grandchildren; 19 great grandchildren; sisters, Marcelline (Howard) Degener of Norfolk, Barbara (Ken) Merkel of Gretna, Marilyn (Peter) Finch of Chattanooga, TN, and Lois (Paul) McKeag of Highlands Ranch, CO; brothers, Jim of Norfolk, Russell (Erma) of Norfolk, and Robert (Judy) of Neligh. Lucille is preceded in death by her parents; husband, Wendelin, in 2005; brother, John Eggerling; and sister-in-law, Marcy Eggerling.