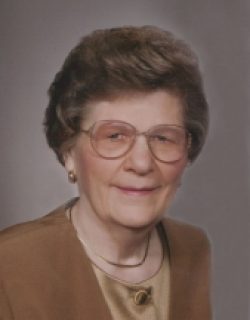 Virginia Kreikemeier, 91, of Fremont, formerly of West Point, died Thursday, March 23 at Nye Legacy in Fremont. Funeral Mass will be Monday, March 27 at 10:30am at St. Boniface Catholic Church at Monterey. Burial will be at St. Boniface Cemetery with lunch following at the Nielsen Center. Visitation will be Sunday from 8:00am to 12:00pm at Stokely Funeral Home and continue from 1:00pm to 3:00pm with Christian Mothers and public rosary at 2:30pm at St. Mary’s Catholic Church. Memorials may be made to St. Boniface Catholic Church or Cemetery. Stokely Funeral Home in charge of arrangements. Virginia Rita Kreikemeier was born on March 7, 1926 to Theodore’Ted’ and Clara (Kroenke) Pieper on the family farm in Dodge County. Virginia was a very bright adolescent and graduated from Dodge High School in 1942. After high school, she took a job at the bank in Dodge. On September 3, 1947, Virginia married John B. Kreikemeier at St. Joseph’s Catholic Church in Dodge. The couple farmed at the Kreikemeier home place before moving to West Point in 1982. Virginia was a member of St. Boniface and St. Mary’s Catholic Church, Christian Mothers, and Catholic Daughters. She was a deeply religious woman who spent many hours praying the rosary and her’Mother’s Love’ prayer book. Virginia enjoyed playing cards, square dancing and bowling. She will be remembered for many things, especially for the devotion she showed toward her husband and children. Virginia is survived by her children, Carol (Richard) McGill of Fremont, Mary (Larry) Rihanek of Lincoln, John A. (Anita) of North Bend, Joan (Leon) Steffen of West Point, Marcia (Carmen) Klein of Bellevue, Kevin (Cherie) of West Point, Susan (Joe) Hodson of Omaha, and Thomas (Kris) of West Point; daughter-in-law Mary (Dean) Allen of Lee’s Summit, MO; 36 grandchildren; 59 great-grandchildren; 2 great-great-grandsons; sister, Mariann Poledna of Schuyler; and brother, Norbert (Delma) Pieper of Lincoln. Virginia is preceded in death by her parents, Ted and Clara Pieper; husband, John in 2015; sons, Patrick in 1983 and Bernard in 2003; son-in-law, Dan Slagle in 2001; and brother, Bernard Pieper.