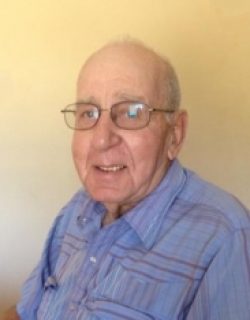 Dwayne Toelle, 80, of West Point, died Saturday, April 2, 2016 at St. Francis Memorial Hospital in West Point. Memorial Service will be 10:30am on Thursday, April 7 at St. Paul Lutheran Church. Lunch will follow in the church hall. Memorials will be directed by the family. Dwayne Joseph Toelle was born on November 11, 1935 to Frank and Clara (Moody) Toelle in West Point. He attended Guardian Angels school through the 8th grade before returning home to help his father farm. In his teenage years, Dwayne also helped Frank Fillmer with his farm. On November 15, 1955, he was united in marriage to Lois English in West Point. In 1955, Dwayne started working for the Cuming County Public Power District where his work ethic earned him several promotions. After 43 years, he retired from CCPPD and worked for Bracht Feedyards. Dwayne then started his dream job working for Nebraska Veterinary Services in their warehouse. Dwayne was involved with the Jaycees, Izaak Walton League, and Cuming County 4-H Sheep Division. He and Lois were instrumental in starting the West Point Exotic Bird Auction and were also in charge of the children’s barnyard at the Cuming County Fair. Dwayne had a passion for all animals and especially loved his laying hen chickens. He loved conversing with friends at the fair and with the farmers at work. Dwayne could be found at the Baron Pet Cemetery helping with projects and keeping up the grounds with his friend, Bob Wostoupal. Survivors include son Joel of Granite Falls, WA; daughter Jill Toelle of West Point; grandson Jamie Toelle of Long Beach, CA; siblings Margie Kelly of Lincoln, Sally Wordekemper of West Point, Liz Diers of Fremont, Angie Mandel of Dodge, Rosie (Art) Hasemann of West Point, Joan Anderson of Fremont, Vincent (Jim) Toelle of Fremont, Doris Johnson of Fremont, and Darlene (Larry) Pabian of Omaha; sister-in-law Sharon (Norval) Utemark of West Point; and many nieces and nephews. Dwayne is preceded in death by his wife, Lois, in 2003, parents, and brother Frankie Toelle.