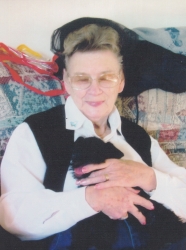 Vernelle Wortman, 87, of West Point, died peacefully in her sleep on Friday, March 25, 2016 at SilverRidge Assisted Living in Gretna. Funeral Mass will be 10:30am on Tuesday, March 29 at St. Mary’s Catholic Church in West Point. Burial will be at St. Michael’s Cemetery with lunch following at the Nielsen Center. Visitation will be from 12:00pm to 7:00pm on Monday with Guild Rosary at 1:30pm and Vigil Service at 7:00pm all at Stokely Funeral Home. In lieu of flowers, memorials may be made to local hospice care or the Nebraska Humane Society.

Vernelle Elaine Vodvarka was born on August 11, 1928 to Fred and Leona (Horak) Vodvarka at rural Dodge where she attended District 45 grade school. She later moved to Stuart, IA with her family where she attended her freshman year at Stuart High School before moving back to Nebraska. Vernelle graduated from Scribner High School in 1946. On August 18, 1947, she married Ray Wortman at St. Mary’s Catholic Church in West Point. They called West Point home and raised a family of five boys. Vernelle had various jobs and eventually became the manager at Somerset Apartments in 1978 and retired in 1993. Vernelle was a member of St. Mary’s Catholic Church and Guild. She could be found watching sports on the television and especially loved watching the Huskers. She loved sewing, making quilts, and cooking for her family.

The family would like to thank St. Francis Memorial Hospital and the West Point Living Center for their care in the past, and SilverRidge Assisted Living in Gretna and Hospice Serene Care for their efforts, care, and dedication especially in the last few months. Visit Vernelle’s living obituary at www.forevermissed.com/vernelle-wortman