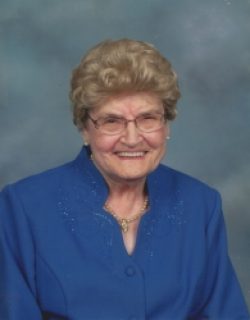 Gertrude Baumert, 102, of West Point, formerly of Dodge, died Saturday, February 6, 2016 at Parkview Home in Dodge. Funeral Mass will be at 10:30am on Tuesday, February 9 at St. Mary’s Catholic Church with Reverend Steve Emanuel as celebrant. Lunch will be after Mass at the Nielsen Center. Graveside service will be at 1:30pm at St. Wenceslaus Cemetery in Dodge. Guild and Christian Mothers rosary will be 1:30pm on Monday at Stokely Funeral Home and vigil service will be at 7:00pm at St. Mary’s Catholic Church. Visitation will be from 12:00pm to 4:00pm on Monday at Stokely Funeral Home and will continue at church from 5:00pm to 7:00pm. Memorials may be made to GACC Endowment. Gertrude Veronica Baumert was born on August 9, 1913 to Ferdinand and Helena (Kluthe) Ulrich at Monterey. She attended St. Boniface Catholic School. On December 30, 1936, Gertrude married John Baumert at St. Boniface Catholic Church. The couple farmed south of Dodge where Gertrude was an active farm wife and loving mother. She was a faithful member of St. Wenceslaus during her time on the farm. Following John’s death in 1984, Gertrude moved to West Point. Gertrude was a member of St. Mary’s Catholic Church, Guild, and Christian Mothers. She loved to play bridge, quilt, and spend time with her grandchildren. Gertrude is survived by her daughter Jeanine Weiler of Omaha; sons Dennis (Jeanne) Baumert of Scribner and Dave (Linda) Baumert of West Point; 15 grandchildren; 49 great-grandchildren; and 3 great-great-grandchildren. She is preceded in death by her husband John; son Vernon in 1956; son-in-law Jim Weiler in 2014; sisters Hildegard Oligmueller and Julie Heimann; and brothers Joe, Wendelin, and Monsignor Roman Ulrich.