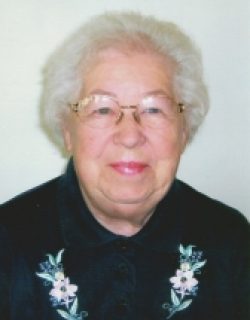 Marilyn Kreikemeier, 83, died Saturday, January2, 2016, at Bergan Mercy Hospital in Omaha. Funeral Mass will be 10:30am Tuesday, January 5 at St. Mary’s Catholic Church with Reverend Steve Emanuel as celebrant. Burial will be at St. Michael’s Cemetery with lunch following at the Nielsen Center. Visitation will be Monday, January 4 from 12:00pm until 8:00pm with Guild and Christian Mothers/Catholic Daughters Rosary at 1:30pm and Wake Service at 7:00pm all at Stokely Funeral Home. Memorials may be made to St. Joseph Retirement Community Memory Care Unit. Marilyn Ann Kreikemeier was born January 6, 1932, at West Point to Matthew and Emma (Wolken) Herman. She graduated from Guardian Angels Catholic School in 1950 and in her early years worked at Farmers Union Grocery Store in West Point. On February 5, 1953, Marilyn married Arnold Kreikemeier at St. Mary’s Catholic Church. The couple farmed west of West Point and Marilyn worked at Wimmer’s and the Rural Water District. The couple moved to West Point in the fall of 1999. Marilyn was a member of St. Mary’s Catholic Church, Guild, Christian Mothers and was a Regent for the Catholic Daughters. She was active with the Cuming County Fair, serving as Floral Superintendent for 21years. She also served on the election board for the Elkhorn Township. The couple enjoyed square-dancing with the Bustles and Beaus. When she wasn’t gardening, Marilyn loved to embroider quilts for all her children and grandchildren who were her pride and joy. Survivors include her husband, Arnold of West Point; children, Harvey (Shirley) Kreikemeier of West Point, Angela (Dave) McMahon of David City, Wilfred (Linda) Kreikemeier of West Point and Jerome (Denise) Kreikemeier of West Point; 12grandchildren; 11 great-grandchildren; and siblings Geraldine (William) Gentrup of West Point, Luella Jacobs of Omaha, Lloyd (Carol) Herman of Sun City West, AZ, and Norma (Norman) Emanuel of West Point. Marilyn is preceded in death by her parents, one grandchild and brother-in-law Ron Jacobs. Visit Marilyn’s living obituary at www.forevermissed.com/marilyn-kreikemeier