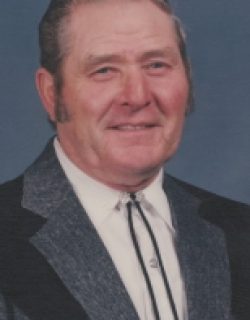 Ray Ruskamp, 89, of Dodge, died Sunday, November 29, 2015 at Lancaster Rehabilitation Center in Lincoln after a fourteen year battle with Parkinson’s disease. Funeral Mass with military honors will be 10:30am Thursday, December 3 at St. Wenceslaus Catholic Church in Dodge with Reverend An Duy Phan as celebrant. Burial will be at Fort McPherson National Cemetery at a later date. Visitation will be from 3:00pm to 7:00pm with a Vigil Service at 7:00pm on Wednesday all at church. A memorial has been established. Raynard Lawrence Ruskamp was born April 17, 1926 in Colfax County to Joseph and Anna (Grosserhode) Ruskamp. He grew up on the family farm and attended Sacred Heart Academy at Olean. Ray was a member of the United States Army from December 1948 until December 1949, and September 1950 until July 1951, serving in the 64th field artillery in Korea. On October 18, 1951, Ray married Margaret Gentrup at Holy Cross Catholic Church in Beemer. The couple farmed five and a half miles south of Dodge, retiring in 1991. Ray was a member of St. Wenceslaus Catholic Church, serving as Holy Name officer, trustee for eight years, and EMHC for five years; and American Legion. His favorite pastimes included singing, bowling, cards, and calling for square dances. Survivors include his wife Margaret of Dodge; sons Marvin (Donna) of Bertrand, Robert (Carol) of Lincoln, and Mark of Omaha; daughter Donna (John) Bode of Lincoln; sister-in-law Bernadine Ruskamp of Scribner; eleven grandchildren; 18 great-grandchildren; and numerous nieces and nephews. Ray was preceded in death by his parents; siblings Lawrence, William, Adolph, Roman, Fr. Florian, Sr. Catherine, Sr. Elizabeth, Sr. Corrine, Sr. Veronica, Jermain, Francis, and Tony Ruskamp.