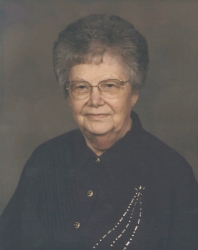 Rosalia’Rosella’ Meier, 99, of West Point, died Wednesday, November 25, 2015 at Colonial Haven Nursing Home in Beemer. Funeral Mass will be Saturday, November 28 at 10:00am at St. Mary’s Catholic Church with Reverend Steve Emanuel as celebrant. Burial will be at St. Michael’s Cemetery with lunch following at the GACC cafeteria. Visitation will be Friday from 12:00pm to 7:00pm with a Christian Mothers rosary at 1:30pm and Wake Service at 7:00pm all at Stokely Funeral Home. Memorials maybe made to Colonial Haven or to St. Joseph’s Retirement Community. Rosalia Elizabeth Meier was born on June 8, 1916 to Herman and Mary (Tingelhoff) Luebbert in West Point. As a young family, they moved to Overton where Rosella graduated from high school. On May 4, 1937, Rosella married Conrad Meier at St. Mary’s Catholic Church. The couple farmed six miles south of West Point before retiring and moving to town in 1975. Rosella was an active member of St. Mary’s Catholic Church, Guild, and Christian Mothers. She was an admirable farmwife and mother and could be found in her garden. Rosella was also known for her quilting, crocheting, and baking skills. Rosella is survived by her son Tom (Jan) Meier of Fremont; daughters Rozanne Herman of West Point, and Linda (Marvin) Eschliman of Wisner; daughter-in-law Leona Meier of West Point; grandchildren Carol, Mike, Lisa, Jenifer, Amy, Beth, Barb, Andrea, Chris, Brandon, Ryan, and Jason; and 17 great grandchildren. Rosella is preceded in death by her husband, Conrad, in 1994; son James; great-grandson; and brothers Robert Luebbert and Victor Luebbert.