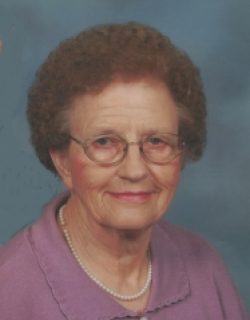 Wilma Gentrup, 83, of West Point, died Sunday, September 27, 2015 at the West Point Living Center. Funeral Mass will be Thursday, October 1, 2015 at 10:00am at St. Mary’s Catholic Church with Reverend Steven Emanuel as celebrant. Burial will be at St. Michael’s Cemetery with lunch following at the Nielsen Center. Guild rosary will be at 1:30pm and vigil service will be at 7:00pm on Wednesday at Stokely Funeral Home. Visitation will be from 9:00am to 8:00pm Wednesday at Stokely Funeral Home. Memorials may be made to St. Joseph’s Retirement Community. Wilma Mary Luebbert was born March 27, 1932 on the family farm west of West Point to John and Elizabeth (Hagedorn) Luebbert. She grew up on the farm and attended St. Anthony’s Catholic School at St. Charles. On April 21, 1954, Wilma married Paul Gentrup at St. Anthony’s Catholic Church. The couple farmed east of West Point, and Wilma worked at St. Joseph’s Retirement Community for several years until retiring in 2008. Wilma was a member of St. Mary’s Catholic Church, Guild, and Altar Society. She loved to bake, garden, and enjoyed competing at the county fair. She loved all animals especially cats. Survivors include her sons Keith (Mary) Gentrup of Omaha and Dean Gentrup of West Point; sister Elsie Popken of Fremont; and brother-in-law Lawrence (Mildred) Gentrup of Fremont. Wilma was preceded in death by her parents; husband Paul on December 28, 2007; brothers Fred, Leo, Casper, and Ben Luebbert; and sister Irene Luebbert.