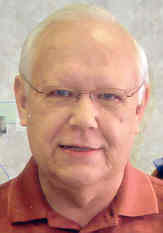 Joel Ernesti, 74, of West Point died Friday November 15, 2013 at Colonial Haven in Beemer. Memorial Mass will be 11:00am Saturday November 23 at St. Mary’s Catholic Church with Reverend Frank Lordemann as celebrant. Burial will be at St. Michael’s Cemetery. Visitation will be 9:00am-8:00pm Friday November 22 at Stokely Funeral Home, with family receiving friends 6:00-8:00pm. Memorials may be made to West Point Library Foundation. Joel John Ernesti was born September 12, 1939 in West Point to Martin and Maurine (Nitz) Ernesti. He graduated from Guardian Angels High School in 1957 and Wayne State College in 1962. Joel taught history and political science in Nehawka, NE and at Roncolli High School in Omaha. He served as an educator for 20 years, retiring in 2010, and also worked at Tom’s Rexall Drug in West Point. Joel enjoyed Husker football, was an avid reader, and liked working on family history. He contributed to West Point’s 150th Anniversary book and was well-known for keeping up on all his extended family’s birthdays, special occasions, and life events. He was a member of St. Mary’s Catholic Church and was a charter member of the Elkhorn Valley Genealogy Society and served as its president for many years. Joel was also a member of the West Point Library Foundation and also served as its president. Survivors include his sister-in-law Margaret Ernesti of West Point; aunt Faye Nitz of Beemer; nieces and nephews Michelle (Jon) Einfalt of West Point, Jeff (Kathie) Ernesti of West Point, Rob (Karen) Ernesti of Lincoln, Elizabeth (Kyle) Ray of Papillion, and Alicia (Rob) George of Omaha; cousins Diane Nitz of Columbus, Shelley (Jerry) Wellman of Beemer, Terry (Lori) Nitz of Omaha, and Maureen Nitz of Kearney; and many great-nieces and -nephews. Joel was preceded in death by his parents; brother David; brother Michael and his wife Cathy; and brother Thomas. Stokely Funeral Home is in charge of arrangements.