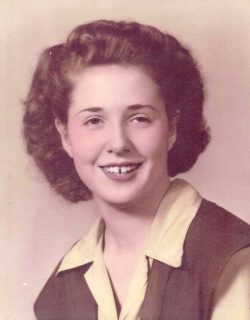 Gloria Sharp, 83, of Beemer died Tuesday November 5, 2013 at St. Francis Memorial Hospital in West Point. Funeral service will be 10:30am Tuesday November 12 at Beemer Mennonite Church. Burial will be in Beemer Cemetery at a later date. Visitation with family receiving friends will be 5:00-7:00pm Monday November 11 at Stokely Funeral Home in West Point. Memorials may be made to Beemer Fire Department. Gloria was born October 15, 1930 in Battle Creek, MI to Earl and Edna (Davis) Babcock. She attended 13 different schools in 13 years and graduated from high school in Scotia, NE in 1949. On March 13, 1951, Gloria married Edward Sharp in Omaha. The couple farmed and made their home west of Beemer. Gloria was a member of Seventh Day Adventist Church, and her favorite pastimes included crafts and playing the piano. Survivors include daughters Lois Ann Crowell of Kaufman, TX, Rebecca Brown of Lincoln, and adopted daughter Angel Sharp of Holdrege; sons Paul Sharp of Vermillion, SD and Joseph (Cynthia) Sharp of Beemer; grandson Brian Crowell; sister Donna; sister-in-law Merna; and nieces, nephews, and other family members. Gloria was preceded in death by her parents; husband Edward in 2004; sister Audrey; and brothers Allen and Wayne. Stokely Funeral Home is in charge of arrangements.