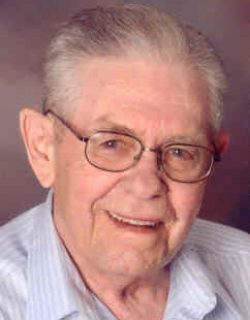 Melvin Dinslage, 80, of West Point died March 22, 2013 at West Point Living Center. Funeral Mass will be 10:30am Tuesday at St. Mary’s Catholic Church with Reverend Gerald Gonderinger as celebrant. Burial with military honors will be at St. Michael’s Cemetery. Rosary will be 7:00pm Monday at Stokely Funeral Home, with visitation 9:00am until 7:00pm. Memorials may be made to American Heart Association and St. Mary’s Catholic Church. Melvin Joseph Dinslage was born March 10, 1933 in West Point to Herman J. and Theresa L. (Peplinski) Dinslage. He grew up on a farm near Aloys and attended school there through eighth grade. Melvin was a truck driver in the Army during the Korean War, serving sixteen and a half months in Korea. On November 22, 1955, Melvin married Ima Jean Parr at St. Joseph’s Catholic Church in Dodge. The couple farmed and raised their family west of West Point. Melvin and Ima Jean moved to Alliance in 1986, where Melvin worked for Dinklage Feed Yards until his retirement in 2007. The couple moved to West Point in 2009. Melvin was a member of St. Mary’s Catholic Church and Veterans of Foreign Wars. Melvin is survived by his wife Ima Jean of West Point; sons Mark (fiancee; e Vicke Knauss) of Fremont and Jim of San Francisco, CA; daughter Jane (Mark) Svoboda of Pender; sister Mary Jean (George) Gatzemeyer of Columbus; and grandchildren Catherine, Nicholas, and Christina Svobodam.elvin is preceded in death by his parents. Stokely Funeral Home in charge of arrangements.