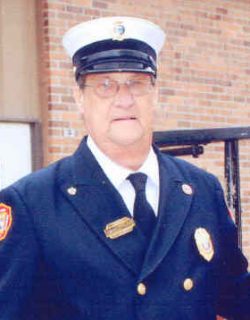 David Heywood, 68, of Snyder died March 3, 2013 at Lakeside Hospital in Omaha. Funeral Mass will be 10:30 am Wednesday at St. Leo’s Catholic Church in Snyder with Reverend Don Cleary as celebrant. Burial will be at St. Leo’s Catholic Cemetery. Rosary will be 7:00pm Tuesday with visitation from 3:00pm to 7:00pm, all at the church. Memorials may be made to Snyder Volunteer Fire Department, Nebraska State Firefighters Museum, or Snyder Over 60 Center. David Herbert Heywood was born May 21, 1944 to Herbert and Gertrude (Cordes) Heywood in Sioux City, IA. Dave graduated from Snyder High School in 1962 and attended Wayne State College. On July 15, 1967, Dave married Gerri Emanuel at St. Charles Catholic Church in North Bend. Dave worked as an accountant at Smeal Manufacturing, then at Danko Emergency Equipment, for a combined 48 years. Dave was a member of the Snyder Volunteer Fire and Rescue Department for 43 years and was actively involved in fire prevention programs and Junior Fire Patrol. Dave’s biggest honor was serving as President of the Nebraska State Volunteer Firefighters Association (NSVA) in 2012, and he was currently serving as District 2 director of the same association and also served as President of Northeast Volunteer Firefighters Association. He served on the Town Board and was a former Mayor of Snyder. Dave coached softball and baseball, as well as being the Secretary and Treasurer of the Dodge County Baseball Association. He enjoyed golfing, traveling with his wife, and spending time with his grandchildren. Dave is survived by his wife, Gerri; sons Todd (Becca) Heywood of Omaha, Tim (Chris) Heywood of Dodge, and Matt Heywood of Omaha; daughter Jillian (Jason) Oltman of Denton; grandchildren Chase, Timothy, Blake, Austin, Samantha, Patrick, and Drake Heywood, Courtney (Caleb) Lase, and Kierra and Cole Stewart; sister Janet (Vern) Heller of Atkinson; brother Paul (Mary Lou) Heywood of Fremont; sisters-in-law and brothers-in-law; and a host of friends. He is preceded in death by his parents and father- and mother-in-law Charles and Marie Emanuel; nieces and nephews Katie Emanuel, Jeffrey Heller, Stephanie Wolf, Mark, Laura, and Kathryn Slattery.