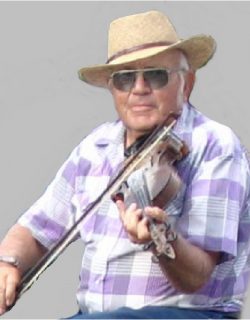 Robert Kenaston, 84, of Springview, NE died Thursday, January 31, 2013 at McAllen Medical Center in McAllen, TX. A memorial service will be held in Donna, TX in February to celebrate his life among his many Winter Texan musician friends and fans. An additional memorial service will be held in Springview, NE on May 24, 2013. Stokely Funeral Home of West Point, NE is in charge of arrangements; stokelyfuneralhome.com. Robert Dewey Kenaston was born September 10, 1928 in Ainsworth, NE to Sanford and Martha (Haller) Kenaston. He attended School District 7 in rural Springview across the highway from the ranch he called home his whole life. On July 12, 1952, Bob married Arvilla Pratt in Long Pine, NE. The couple raised cattle on the family ranch for many years. Throughout his life, Bob enjoyed music and played for many dances in the area, first in his dad’s band, then his own band, The Country Tones. He also played many shows and dances with his children, Roger and Vanessa. Bob was a member of the National Old Time Fiddler’s Hall of Fame and National Traditional Country Music Association Hall of Fame. He won numerous awards for his fiddle playing and was the promoter and organizer of the Country & Western Fiddler’s Jamboree held annually in Springview, NE for 43 years. He was an avid participant in country and bluegrass music festivals and he loved to dance. He was well known for collecting old cars and John Deere tractors and will be remembered by his family and friends as the patriarch of the Kenaston Family Band or “Pops”. Bob is survived by wife, Arvilla of Springview, NE; son Roger (Sharon) Kenaston of Lyons, NE; daughter Vanessa Kenaston of Springview, NE; grandchildren Bobbi Jo (Scott) Lytle of Ord, NE, Martin (Jennifer) Kenaston of Dakota City, NE, Clifford (Brittany) Heyden of Long Pine, NE and Jesse Heese of Millboro, SD; great grandchildren, Shelbi, Shelden & Stetsen Lytle; Alison & Lindsay LaFleur; Bailey Devall and Mia Heyden; and other special family members. He was preceded in death by his parents.