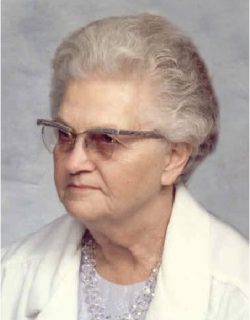 Zelma Clements, age 96, of West Point, Nebraska formerly of Bassett, Nebraska passed away Thursday, January 17, 2013 at West Point Living Center. Funeral services will be held on Monday, January 21, 2013 at 3:00 pm. at Stokely Funeral Home Chapel with Pastor Hugh Cerutti, officiating. Graveside Services will be 11:00 am. Tuesday at Bassett Memorial Park Cemetery in Bassett, NE. Memorials may be made to the Assembly of God Church in Bassett. Visitation will be 9:00 am. until 3:00 pm. Monday at Stokely Funeral Home in West Point which is charge of arrangements. Zelma Clementswas born to Martin and Bessie (Tadlock) Fahrenholz in Norfolk, NE on January 15, 1917 and attended rural school in Rock County, NE. On December 4, 1933, Zelma was united in marriage to Herbert Jay Clements at Burke, SD. To this union nine children were born. The couple lived in Lyons, then in Fremont where Zelma worked at Campbell’s Soup. In 1969, they moved to Fort Collins, CO where she worked in housekeeping at Poudre Valley hospital. They returned to Bassett in 1983 where Herbert Jay passed away on May 29, 1994. Zelma continued to live in Bassett until 2010 when she entered the West Point Living Center, West Point, NE and lived there until her passing. She taught her children to get along with people, to be kind and to enjoy working even if the job was not enjoyable. Zelma was a help and encouragement to her family and others, blessing many people with her constant, steadfast spirit. She was loving and giving towards others and indeed was a pearl of great price. In 1953, Zelma became a Christian receiving Jesus Christ as her Savior. She lived the rest of her life as a dedicated Christian. Zelma was member of the Assembly of God Church and served as an adult Sunday school teacher. Zelma leaves to mourn her passing; sons Gary (Dot) of Hastings, MI, Gene (Sandy) of Bonham, TX, daughters; Lennice (Hugh) Cerutti of Farmington, MO, Judy (John) Raabe of West Point, NE, Marjorie (Jim) Boyer of Hastings, MI, Kay Boyer of Tuscan, AZ, and Carolyn Franklin of Flint, MI, son-in-law Norm Stahl of Freeport, MI, daughter-in-law Becky Clements of New Smyrna Beach, FL, 30 grandchildren and several great grandchildren and great great grandchildren and a number of nieces, nephews, cousins and a host of friends. Zelma was preceded in death by her husband Herbert Jay Clements, her parents, son Floyd, daughter Hilda Stahl, and son-in-law Douglas Franklin.