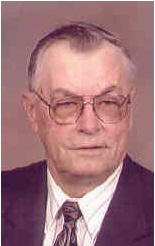 Denis C. Westermann, 88, of West Point, died Monday, September 3, 2012 at West Point Living Center. Funeral Mass will be 10:30 am Thursday, September 6, 2012 at St. Mary’s Catholic Church with Reverend Frank Lordemann as celebrant. Burial with Military Honors will follow at St. Michael’s Cemetery. Visitation will be 9 am to 5 pm Wednesday at Stokely Funeral Home, and then continue at the St. Mary’s Catholic Church. Wake Services with Knights of Columbus Rosary at 7:30 pm Wednesday at the Church. Stokely Funeral Home is in charge of arrangements. Memorials may be made to St. Mary’s Endowment. Denis was born May 10, 1924 on the family farm in Cuming County near Monterey to Casper and Frances Imsicke Westermann and attended school at St. Boniface Catholic School. He served in the U. S. Navy as a Fireman First Class aboard the USS Savo Island from January 31, 1945 until July 3, 1946. On August 17, 1949, Denis married Camilla Hoetfelker at St. Leo’s Catholic Church in Snyder. The couple farmed near Howells until 1956, moving to the farm south of Snyder, retiring to West Point in November of 1996 where Denis worked part time at Alco and as a van driver for West Point Living Center. Denis is a member of St. Mary’s Catholic Church, Knights of Columbus, and the Snyder VFW. He was a part of the Humble Heroes trip to Washington D. C. He enjoyed woodworking and playing cards. Survivors includedaughters; joDene (Norm) Jedlicka of Norfolk and Lois (Mike) Oligmueller of West Point, sons; Allen (Carla) of Glenwood Springs, CO, Ronald of Scribner, David (Linda) of Columbus and Marvin (Jean) of Maplewood, MN, brother Hilbert Westermann of Denver, CO, sisters; Marina Tworek of Silver Creek and Regina Stump of Louisville, 14 grandchildren and 10 great grandchildren. He is preceded in death by his parents; wife, Camilla in 2008; brothers: Norbert, Leonard and Casper, Jr. Westermann, and sisters: Lee Meyer and Bernadette Westermann.