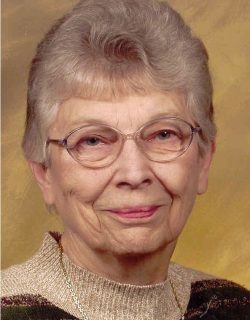 Esther Schultz, 84, of West Point, died Thursday, July 26, 2012 at St. Francis Memorial Hospital in West Point. Funeral services will be 10:00 am. Monday at St. Paul Lutheran Church with Rev. Robert Mayes officiating. Burial to follow at the Beemer Cemetery. Visitation will be noon until 8:00 pm. Sunday with family receiving friends 3:00 pm. until 5:00 pm. Memorials may be made to the church. Esther was born May 7, 1928, to Henry and Laura (Ackerman) Schademann near West Point. Esther was baptized and confirmed by Rev. Ed Oelschlaeger at St. Paul Lutheran Church in West Point. She graduated from St. Paul Lutheran Grade School and graduated as class Valedictorian with the West Point High School class of 1946. She was a charter member of the West Point High School National Honor Society. Esther graduated from Commercial Extension College in Omaha. She worked in Omaha and West Point prior to her marriage. On June 5, 1949, Esther married Robert Schultz at St. Paul Lutheran Church. Esther then worked at Schultz Gravel Company as a bookkeeper, Bain’s Department Store for 15 years and Style Plus for 24 years. Esther was a life-long member of St. Paul Lutheran Church. She was a member of the Lutheran Women’s Missionary League since 1953 and held various offices on the local and district level. Esther is survived by son Tom of West Point and daughter Susan (Wallace) Rohrschneider of Ralston. She is preceded in death by her parents, husband Robert Schultz and brothers Elra and Leo Schademann.